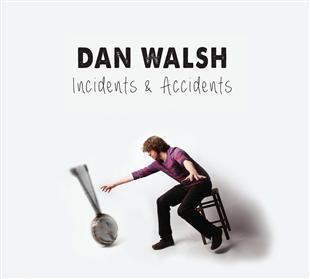 It seems a bit old hat these days to be commenting on the fact that Dan Walsh is regarded as one of the finest banjo players in the UK. His lithe fingers find themselves in so many pies, combining work in the studio with a whole host of names from Seth Lakeman to Levellers, Walsh & Pound and of course his recent integration into the Urban Folk Quartet.

Never one to rest on his laurels, as after all the devil makes work of idle hands, he’s returned to the studio to record a follow up to his energetic Same But Different album of 2013.

Retaining Nic Zuppardi on mandolin and Mark Hutchinson’s percussion, vocals and production skills here’s a case, if ever there was one, for ’if it ain’t broken why fix it’, as a bit of a dream team seems to line up in Rooksmere Studios when Dan Walsh is in town.

Made up of seven songs and four instrumentals, Incidents & Accidents makes more of the songwriting this time round especially lyrically. They offer up quite a personal perspective - in Time To Stay, there’s the exploration of the mixed emotions of returning to home, while the closing Dancing With The Wind’s lyric tells of memories again, this time a moment in time of a family holiday. It’s interesting of course to hear some personal reflections taking a role in the arrangements and compositions.

With A Memory Like Mine and Wobbly Trolley also give an indication of the inspiration behind some of the songs and tunes, the latter clearly motivated by one of those everyday moments in your life which simply has to be captured in time in tune.

Of course there’s plenty of opportunity to indulge in some fleet fingered picking, particularly in the tune set where four tunes combine to stunning effect, building up from a slow banjo picked air to the lively picked finale, they celebrate Dan’s virtuosity on his instrument. Again the titles - A Tune For Sarah, Rambling In Barra, Food For Thought, Thanks To The Kiwis - all give some indication as to the whens and the wheres of their origins and the moments in time they capture and preserve.

For those who may feel that a banjo-based record might struggle to maintain the attention span and possibly even lack variety, Whiplash Reels recalls Dan’s new found passion for Indian classical music - imagine the banjo played as a sitar and you’re on the right track, as this arrangement in particular starts to push the boundaries of what the simple banjo can do in the hands of an skilled maestro.

The Song Always Stays also offers a break from the banjo - after all, too much of a good thing always leaves one wanting less - and is a delightful pastoral and beautifully picked guitar accompaniment to a thoughtful lyric. Again based on Dan and Nic’s personal experience this time of playing to Scots singer Glen Mason in a Surrey care home and rekindling his love of playing and performing, it’s a touching tribute and although banjo free, perhaps the pick of the album, or at least a song which will be returned to when it comes to cherry picking a selection from Incidents & Accidents.

Despite the acclaim for all the collaborative work with which he’s involved, it’s a treat to see and hear Dan Walsh venturing out on his own, taking the lead and showing that there’s much more to the banjo (and the player) than meets the eye.