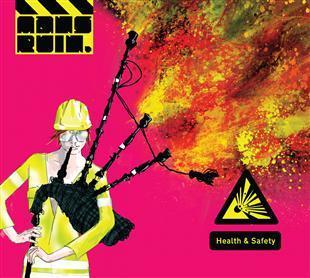 Piping prodigy Calum MacCrimmon and his merry band of funk folksters Man’s Ruin have assembled a modern-sounding album, packed with genres and invention.

Opener Frantic Funk sets the tone. As you might expect from its title, it’s a dancey, vivacious affair, with appropriately funky bass and Hamish Napier’s flute deployed as an essential building block of the music, rather than as a mellifluous embellishment - although he’s capable of that, as he proves later on.

Although funk is a cornerstone of all the songs, there are elements of rock, prog, jazz and dance music in the album too. Time, composed by talented guitarist Innes Watson, combines inventive, Pixies-esque indie-rock guitar with an irresistible toe-tapping beat. Its rocking outro is a highlight.

MacCrimmon saves his bagpipes until the fourth track, Avaaz, which is a rather epic instrumental affair, big and bold. On their website the group suggest it acts as a “recovery piece” for those listening to the album all the way through, which, amusingly, they advise against. It shifts casually into the loungey blues of Days of the Week, which gradually turns up the tempo again, thanks largely to Scott Donald’s superb drumming.

The band continues to mix styles through the contemplative Wash that World Away and the unashamed fun of Midnight Train. The album’s title track is a deeply impressive melding of folk, jazz and rock - it’s a great calling card.

Lyrically, the songs aren’t the most engaging, but it’s easy to imagine a crowd joining in and enjoying themselves. And most will be too busy dancing to care. And while the album is shot through with the sense of fun you might expect from a group whose leader is also a member of the magnificently monikered RTK9000 and the Knobsquad, Man’s Ruin are serious musicians. You’re never quite sure where a song is going to go next, but you can be pretty sure you’re going to enjoy it.

Released in 2011 on Box of Chocolates Records