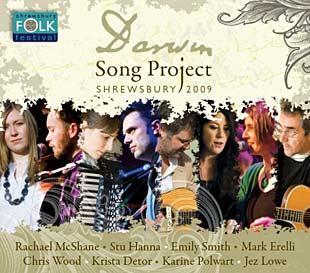 In March 2009 a group of musicians assembled for a Shropshire retreat to ponder and be inspired by the 200th anniversary of the birth of a certain Charles Darwin and the 150th of his seminal work ’The Origin of Species’ in which the idea of evolution was introduced - creationists look away now! The result was an album produced by and for the Shrewsbury Folk Festival where the artists will also perform live.

You might think this kind of topical project could be a recipe for disaster, leading to a flat and contrived album produced to a deadline? That couldn’t be further from the truth - the Darwin Song Project has produced one of the finest albums of the year. This is distinctly an album of songs, with strong lyrics inspired by Darwin’s life and work. Its fascinating to me that the themes brought out most strongly are those of Darwin not as a scientist, but as a man, husband and father. The adventure and loss of a long sea voyage into the unknown and the constant worry of the religious Emma Darwin that her disbelieving husband would be lost to her in heaven, and the grief of his daughter’s death are powerful.

The standout tracks are Karine Polwart’s heartbreaking ’We’re all leaving’, which beautifully links the loss of Darwin’s daughter to his stark theory of survival of the fittest, a thought he ponders while walking his ’thinking path’ in the garden of the house. Also excellent is ’Jemmy Button’, the story of a native taken on the voyage of the Beagle and paraded around London before being returned to his own island, and Erelli & Polwart’s ’Mother of Mysteries’ in which Darwin’s ideas are evocatively brought to life.

A different note is sounded in ’We’ll hunt him down’ a pointed comment on religious opposition to science teaching before the superb a cappella finale ’You may stand mute’. I heartily recommend this album, both as a fine collection of songs in their own right, and also as an inspiration to a little further reading.

Recorded live in Shrewsbury on March 13th 2009 at the first performance of the Darwin Song Project songs. Mixed by Stu Hanna. Released in August 2009 by the Shewsbury Folk Festival.