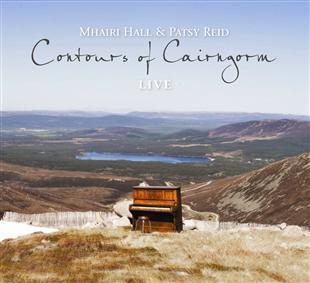 Contours of Cairngorm is an exploration of traditional Scottish music, as played by Mhairi Hall and her trio, Patsy Reid and the Edinburgh Quartet. The album was recorded live at Celtic Connections 2011, with a selection of traditional and self-penned tunes, all arranged by Mhairi and Patsy for the performers. It’s also quite nice to listen to, so that’s alright then.

Mhari’s skill at playing piano is on show to a great degree - she’s perfectly comfortable playing the quick pieces with crazy rhythms, but also playing a nice accompaniment for Patsy and the rest on the quieter and slower tracks.

Stand out tracks include the album’s finale Cairngorm, which has one of the most fluid key and tune changes that you’ll hear for a while, completely avoiding any hint of corniness or ’boyband’. The World’s Gone Over Me Now, is also very fine, but with some cross rhythms that can throw the listener.

The slower airs take on a more lounge-style jazz affair, which is a welcome change of pace from the fast pieces. It would be nice for there to be a few more fast pieces, since they seem to be few and far between, but the slower ones do seem to be where Patsy Reid comes to the fore.

It’s difficult to fault this album. As with any, there will be tunes that you don’t like as much as others, but there is nothing here that is in the least substandard.

There’s little niggling things - because the whole album is one long set, with each piece segueing into the next, some of the transitions get a bit samey. The constant use of strings playing a variation of the same rhythm can get a bit dull after a while.

But to be honest, that’s being petty for the sake of it - the album is wonderful. It’s perfect for times when you want some music that you don’t need to focus on completely to enjoy, but at the same time focusing on it wholeheartedly will leave you enjoying every second of it.

Some things are just exciting to hear. Mhairi Hall’s piano playing and arranging is one of them. The news that Mhairi and Patsy will be performing together again to bridge the gap between traditional and classical musicians is even more so.