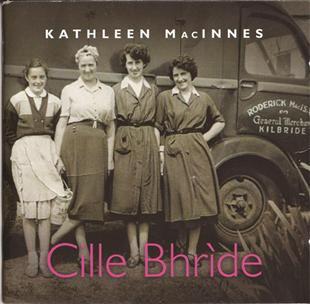 The songs on Kathleen Macinnes’ Cille Bhrìde are entirely in Gaelic. However, an inability to understand the language will not prevent you from appreciating the beauty of these songs.

The songs are mainly traditional and are steeped in the culture of the Gaelic speaking community. There are working songs: Alasdair Òig ’Ic ’Ic Neacail / Latha Siubhail Beinne Dhomh from tweed making, while Fear a’ Chota Ruaidh was inspired by a brown tweed coat; songs about livestock: Thugainn a Bhlàrag tells of a stubborn cow while Faca tu’ n Coileach? (Coileach Catriona Chalum) is about a missing cockerel.

Alongside these are the usual songs of lost love (Fhir an Leadainn Thlàith), a retelling of the story of Bonny Prince Charlie and Flora McDonald (Òran a’ Phrionnsa) and a gorgeous Gaelic prayer, A’ Ghrian.

The songs are delicately accompanied by an impressive roster of guest musicians including John McCusker (fiddle, cittern), Michael McGoldrick (uillean pipes, flute) and Andy Seward (bass) to name but three. The voice is always the focus with the instruments only coming to the fore in instrumental passages.

The most striking tracks however are those which contain unaccompanied close harmony singing - Comunn Uibhist ’s Bharraigh - which urges young people leaving South Uist not to forget the Gaelic language - is completely a cappella with Kathleen being joined by Cathy Ann McPhee and Sinead MacIntyre. They also join her on the working songs where the style is more call and response and is very effective. Presumably this would be the tweed maker’s equivalent of a sea shanty.

The Gaelic links between Scotland and Ireland are acknowledged with two songs of Irish origin - the upbeat opening track Teanga Binn Mo Mhàthair and the lovely Shìos an Taigh an Tòraidh which originates from Donegal, and has a simple harp accompaniment.

So, whether you speak Gaelic or not, you can guarantee your ears a treat with Cille Bhrìde.