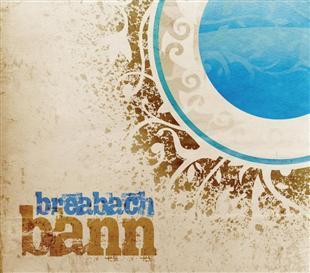 Breabach’s latest studio release Bann (a Gaelic word meaning "band" or "bind") is a great collection of tunes and songs from the Scottish quintet. The group, playing a ridiculous number of different instruments between them (12 in total, thanks to the concerted efforts of Calum MacCrimmon and James Mackenzie), give a tour of traditional Scottish tunes with a peppering of Norwegian and original material.

It’s your usual Scottish affair, which means plenty of upbeat material peppered with touching songs of home. There’s a lot of refreshing arranging on offer here - Glasgow Of The Big Shops starts off with a collection of stabs before the rhythm section moves to a funk style. While it doesn’t become a Bellowhead-esque genre mash up, it does give a nice background whilst letting the tune shine.

The tunes certainly do shine - MacCrimmon and Mackenzie on dual bagpipes/whistles and Henderson on violin are all able musicians making the tunes a delight to listen to. There’s a lack of counter-melodies or harmonies which could make the tunes drag on, instead the tune changes are perfectly timed to prevent that. When the tune changes, it stays long enough to make an impression but leaves before outstaying its welcome.

It’s disconcerting at times though, when the tune sets switch between different styles. We’ll go from strathspey to jig as if nothing has happened, and every time there’s a couple of seconds where it is hard to enjoy the music as you try to figure out what happened.

The odd songs that are thrown in are certainly enjoyable. Megan Henderson has an enchanting voice to listen to, as do the guys who proffer their voices. And when everyone starts singing in harmony, it’s brilliant - Scotland’s Winter has a chance for them all to come together and it turns out almost magical.

The original song Western Skies has a collection of lyrics that are more than recognisable situations for a student, and it manages to entertain without sounding pretentious or alienating those who aren’t students either.

It’s a nice album to listen to and has a lot of very enjoyable subtle things to offer if you give it your full attention. Just be wary of the dance changes that’ll be coming every so often.