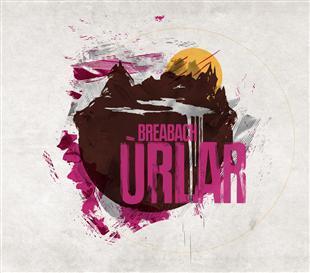 Ùrlar means the basic theme of a piece of classical bagpipe music. Breabach are pinning their colours to the mast with that title. The band are proud of their pipes, and the uniqueness it brings to their music. However, in calling the album Ùrlar they are also emphasising that their music is more than just the basic melody of any piece. This album showcases both the pipes and everything else.

Hi Ho Ro Tha Mi Duilich feature the beautiful singing of Megan, eventually joined by a chorus of the band. As ever it is a challenge to connect with Gaelic songs when you don’t speak the language, but the sleeve notes are full and, particularly in this case, the fondness and longing for homeland comes across very clearly.

I am Proud to Play a Pipe is a further statement of Breabach’s confidence in their identity. It is a very enjoyable piece, focussing on the pipes, but Megan also gets a chance to do some lovely tune singing.

Forvie Sands is a very different affair, with flute taking a haunting lead and various strings adding further to a slightly desolate atmosphere, befitting a village swallowed by the sands.

Calum MacCrimmon takes an unusual lead vocal on a very personal song of the Canadian railroads. It is a gentle affair invoking the steady progress of a train. It has a satisfying melody and is made all the more enjoyable by the sleeve note’s explanation of Calum’s connection to the history of Canadian trains.

Bowmore Fair is a fast paced tune, but can’t compare to Monday Night at Riccardo’s, which contains an opening that makes you sit up and listen. First tune The Dudes of Hazzard has a driving rhythm and great tune, well-suited to the extreme mountain bikers it is inspired by. It gets even faster for Monday Night at Riccardo’s, with whistle, flute and fiddle producing a tune that would make any listener wish they were at a session there.

Ewan Robertson sings The Seven Men of Knoydart and he doesn’t disappoint. Even if this was sung in Gaelic the drama would be clear. But with an English language narrative, by the end the listener is ready to take up the crofters’ cause. A rousing piece then, and a real highlight of the album.

The Old Hill begins in a similar vein to some of the other tunes, but then segues into a foot stomping (literally) pipe tune that asserts itself loud and clear, and then finally a fast, frenetic tune to end the album on an exhausting high.

Breabach continue their lively, accomplished and sensitive takes on Scottish music. Ùrlar is another great album from a talented and distinctive group.