Maz O’Connor - Upon A Stranger Shore 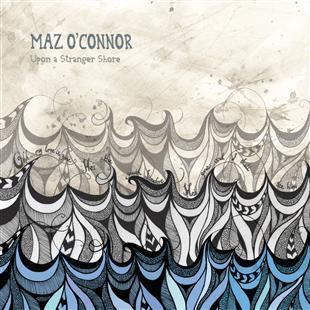 Maz O’Connor follows up her 2011 EP On Leaves or on Sand with a full length album of traditional and original songs Upon a Stranger Shore.

One striking feature of this album is that Maz has taken that most “blokey” of genres, the sea shanty, and made it her own with delicate arrangements of well-known songs (South Australia, Stormalong). She also likes creating song sandwiches - or “patchworks” as she calls them, and the opening track is the first example of this.

Other familiar traditional titles include Leaving of Liverpool and Red Red Rose, in which Maz adds a verse of her own to form another of her patchworks. Also included is a moving rendition of Constant Lovers (the highlight of the album). This is sung completely a cappella, a brave choice to make, but the right one in this case - simply beautiful. The album ends with a tingly version of Caw the Yaws with a simple shruti accompaniment.

The album also showcases Maz’s skill as a songwriter: Rambling Free is a lively song, on that timeless subject of the person who likes to spend their life a-roving. However, it is nothing like the Wild Rover (thankfully!). The subject matter of this and her other compositions, Songs of Old, Whitley Bay, Black and Blue, shows how much she is in touch with the folk idiom.