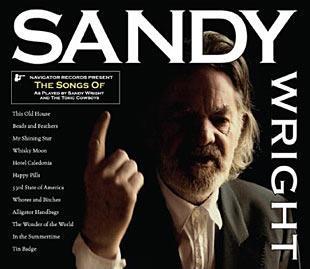 In the British Folk scene, you get used to hearing the same names repeatedly spoken of as influences or key musical figures, and Sandy Wright is such a name. Especially with regards those Bright Young Folk who hail from north of the Border.

This is a beautiful and unique compilation. The first disc “The Songs Of”, showcases tracks from Sandy Wright’s 20 years of song-writing, performed by the writer himself. The second, “As Played By”, then adds an extra dimension to his musical creations by putting them in the hands of some of Navigator’s brightest folk talent.

The result an intriguing and insightful album, which offers aural delights at every turn. And while two tracks feature on both discs, the performances are so different it is a joy to hear the same song again.

’Beads and Feathers,’ for example is barely recognisable as the same track. Sandy Wright’s performance plays heavily on the lyric’s seascape imagery - using his guitar to create the impression the gentle lap of the tide on the seashore and the sound of birdcalls to add ambiance. Chris Wood, however, takes Wright’s incredibly powerful lyrics and puts them centre stage, changing into the minor for a mournful lament.

This two-disc compilation, however, contains an added surprise - a manuscript containing the melodies and lyrics of all the songs performed by Sandy Wright. It’s a beautiful touch, which opens the tracks up to yet more adaptation and, by doing so, will possibly serve to influence the next generation of folk musicians.

Released by Navigator Records on 11 January 2010