David Rotheray - The Life Of Birds 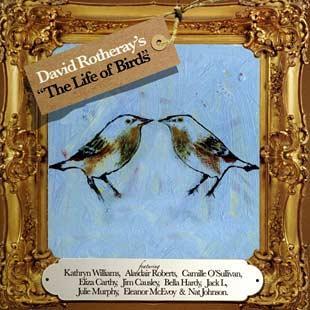 Featuring a whole host of guest artists, David Rotheray’s debut solo album, The Life of Birds’ reads a lot like a who’s who of the British folk scene. Lyrically written entirely by Rotheray, this ’vaguely ornithological’ album offers a pertinent look at modern-day life.

According to the sleeve notes, the notional bird theme which runs through each of the 14 tracks, was sparked by the tale of ’The Sparrow, the Thrush and the Nightingale’. Despite its jaunty, whistled introduction and light-hearted melody, this is not a happy tale. Instead the songbirds’ experiences convey a warning about music, greed and betrayal, which is brought to life by the inimitable Jim Causley. Split into 2 parts this sad tale bookends the album.

In contrast ’The Road to the South’ makes no attempt to conceal its mournful/regretful tone. Instead Eliza Carthy’s voice intensifies the sense of longing to leave the crowded metropolis of London for their old life in Hull.

’Digital Cuckoo’ is a technophobe’s delight. Railing against perceived ’advancements’, the narrator fondly remembers the simpler lifestyle of times-gone-by, which is beautifully summed up by their distaste for the electric alarm clock, or ’Digital Cuckoo’. Musically it is impossible to ignore the nostalgic tone. Backed by Ros Stephen’s expressive string arrangements, Bella Hardy plays her part beautifully as she conjures up images of simpler times.

’Almost Beautiful’ and ’The Best Excuse in the World’ revolve around the ending of a relationship, albeit in completely different circumstances. But whereas the latter leaves doubt as to the narrator’s intentions, ’Almost Beautiful’ is a heart-wrenching lament of someone mourning the effect of Alzheimer’s on their partner. Almost exclusively accompanied by piano and violin, Eleanor McEvoy uses her voice to paint an emotional picture of someone who is forced to recognise that while they may look the same, the person they fell in love with has gone. They are ’just a lost and sad reflection of another’s ghost’. Definitely not one for the feint-hearted.

This is a stunning album featuring an incredible array of collaborations. Touching upon some of the most pertinent issues of the modern-age, David Rotheray once against display his innate talent to write songs that directly touch the listener’s soul.