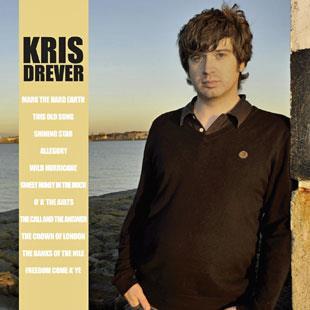 Kris Drever’s second album follows on from the success of his first, showcasing the talent of the Scottish singer and guitarist. Mark the Hard Earth also sees a number of Drever’s friends make appearances, including John McCusker and Karine Polwart. In fact, with the vocal contributions of Polwart, Tim O’Brien and Heidi Talbot, every track has multiple voices in play. Whilst I cannot fault the musicality, it does leave me wanting a Drever-only track. To some extent the same is true of his guitar playing, mixed as it is amongst an array of other instruments.

However, it would be wrong to dwell too much on these points when faced with such an enjoyable album. A mix of traditional and modern songs, Mark the Hard Earth is a predominantly Scottish album, with Sandy Wright songs, Drever’s own compositions and Scottish dialect and tunes a-plenty.

The title track itself was written by Drever, as a response to the way people on TV define what is good and bad, even with regards to weather. Hailing from Orkney it is perhaps no wonder Drever disagrees with rain being bad! Sweet Honey in the Rock marks a more upbeat track, a Boo Hewerdine composition with a distinctly American edge to it.

For me, the stand out tracks come late on this album. The Crown of London is a sublime tune, written by Drever’s brother Duncan. It sticks in my mind, and produces some beautiful imagery. However, it is pipped at the post for the title of favourite by The Banks of the Nile. A familiar story in folk, Drever has set the words to a different traditional tune, and here Heidi Talbot’s vocals make for a wonderful duet of young lovers caught in the challenges of war. There is, perhaps, a resonance for modern times in this tale as well.

Released on 8 March 2010 on Navigator Records.