The Young’uns - Man, I Feel Like A Young ’un 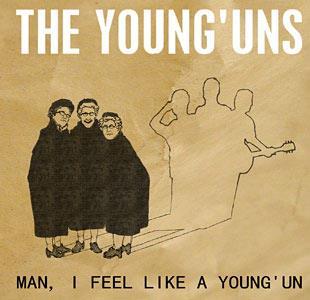 Sean Cooney, Michael Hughes and David Eagle have certainly brought a breath of fresh air into the world of male harmony singing.

Their third album, “Man, I Feel like a Young ’Un”, contains a mixture of traditional, self-penned and contemporary songs. As you would expect from a male harmony group from a fishing town, there are shanties and other songs of the sea included on the album.

Classics like ”Rolling Up, Rolling Down” and “Rolling Down the Bay to Juliana” just invite you to join in with your own harmonies., While there is a sense of fun in many of the tracks the lads demonstrate their ability to deliver a serious song convincingly with gentler songs like “A Sailor’s Life” and the poignantly beautiful “Watercress-O” (my personal favourite).

“Following the Old ’Oss” is a bit of a surprise, being about the traditional May Day celebrations in Padstow, but it is sung with great gusto, and infectious harmonies.

Sean Cooney shows himself to be a talented songwriter and takes the lead on his own compositions. These tend to have piano or guitar and fiddle accompaniment, with Michael and David providing harmonies in the chorus sections. He uses his native North East for inspiration. “Stockton Lass” deals with the traditional subject matter of a girl wanting to marry a man considered unsuitable by her parents.

The children from a local primary school take the lead on another of his compositions, “No More Frying Bacon” based on order misread by the Mayor of Hartlepool during the Spanish wars. The album ends with the gentle “Love Song”, again accompanied by piano and fiddle.

The only thing lacking is the spontaneity and banter you get from the lads at a live performance, although you’ll get a hint of that if you keep listening after the last track has finished.