Seth Lakeman - Live At The Minack 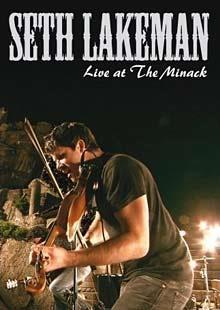 Hewn into the cliffs overlooking the Atlantic Ocean, the Minack Theatre is a truly unique and immensely beautiful venue for any sort of outdoor performance. And given the coastal themes within Poor Man’s Heaven, the unlimited views of the Cornish coast complement Seth Lakeman’s musical style like no other auditorium could.

Whilst not expressly so, the DVD is very much a concert in two parts. The first half: a seated gig bathed in the light of the sun setting over the South West. But as night fell, the band pick up the tempo and the crowd move forward to dance and sing along, raising the energy in the second half ten-fold.

Visually, its incredible to see the light change as the night went on, and is another reminder of the stunning location in which it was shot.

While not an entirely authentic concert experience, the variety of shots provided by the six cameras dotted around the Cornish ampitheatre, capture as much of the atmosphere as possible without losing any of the energy released by those on stage. And with crystal clear sound, the DVD can also be enjoyed as a live recording, capturing Seth and his band at their very best. Having said that, it is a shame that at certain points, the sound is noticeably out of sync within the pictures.

Tracks from all four of his current albums feature on the DVD as well as a taster of his forthcoming release in the shape of the title track ’Hearts and Minds’.

Along with the concert (which can be viewed in full or as individual tracks) the producers have also included a short 3 minute behind the scenes interview with Seth, as well as two promotional videos - although strangely enough not the two videos which were actually filmed at the Minack.

Having been at the concert, I have eagerly awaited the release of this live DVD. The very first solely musical performance at the Minack, it was a truly unique night making this a must-have for both fans and those merely intrigued by Seth Lakeman’s live performance alike.

Released on 7 December 2009 by Relentless. Recorded live at the Minack Theatre in Cornwall on 19th May 2009.