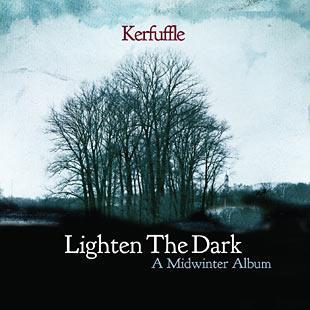 I must say that it is strange listening to a recording destined for the depths of winter in the warm sun and blue skies of October. But not, I suspect, as weird as it must have been for the band to record it in May.

However, the result is undeniably excellent. There are a mixture of carols and seasonal songs, dance tunes and other instrumental pieces. Kerfuffle aren’t known for fussy or overworked music and this is no exception. ’Three Ships’ is a fine start and very similar to the familiar version. It starts softly with Hannah singing, accompanied by guitar and bells and builds with bass and fiddle to a fine singable carol.

The second track is quite unusual. ’The Cherry Tree Carol’ has a quiet guitar and pizzicato backing. The lyrics are quite quirky, featuring a distinctly grumpy Joseph refusing his pregnant wife’s request for cherries. A desire granted by her unborn child, this version apparently gathered from the Appalachians.

A set of three jolly and rather rustic renaissance dances from France make up track four. Called Bransles, the first sounds distinctly like Ding Dong Merrily on High and the others are less familiar but equally catchy. Good tunes all, with accordion, fiddle, guitars and bagpipes.

Another song I found fascinating; ’Lullay My Liking’ is a beautiful lullaby based on a medieval text. The lyrics are tender and quite charming, with a soft harmony in the chorus. There is a gently rollicking version the ’Sussex Carol’ and on track nine a fine interpretation of my favourite carol, ’The Holly and the Ivy’.

The last two tracks are sharply contrasting - the ’Gower Wassail’ is (rather obviously) a wassailing song, sung traditionally door to door rather in the way of modern carollers, Hannah having fun with the deep notes of the chorus.

The last track is very different. ’The Bitter Withy’ is a quite savage song of a most un-Christlike Christ child drowning three contemptuous young lords, then cursing the willow branches with which his mother punishes him. A rather sinister centre section features the tune of ’God Rest Ye Merry Gentlemen’ on the bagpipes.

This is a really wonderful Christmas collection - a sharp and timely reminder of a time when the Feast was a genuine religious festival in an grim time of the year, not the culmination of six months of consumerised madness. It is an album I shall be happy to listen to in season, year after year.

Gentle but lively and uplifting, what better for a Christmas album of really first class traditional folk music?

Released by RootBeat Records on 16 November 2009.