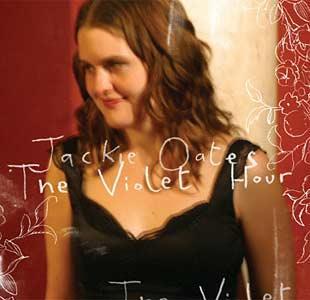 Jackie Oates is one of a number of young female singers making waves on the folk scene. It isn’t easy to stand out alongside Ruth Notman or Bella Hardy, but Jackie does so by sticking to contemplative and mournful tracks that stay close to their traditional roots.

No song illustrates this more on ’The Violet Hour’ than ’Lark in the Morning’, which opens the album. A simple song delivered with a pure, beautiful voice and gentle but striking instrumentation. ’Hampton Lullaby’ features a recorder, and ’Young Donald’ has a passage of whistling - neither are de rigeur for the young folk scene, but both fit perfectly in their contexts.

Songs written by the two Jims, Causley and Moray, fit seamlessly with the traditional elements of the album and despite an array of talented collaborators (not least Phil Beer), Jackie is never overshadowed, and is the undisputed star of the album.

An honourable mention must go to ’Rob Roy’ - a song filled with abduction and forced marriage - just my cup of tea. Although I couldn’t help wondering what Spiers and Boden might do with it.

For me ’Crockery Ware’ is a stand -out song, with its nonsense chorus, and the final track 3/8 Bourrees is fantastic. The pace and excitement of this final tune set is in contrast to the album as a whole, and as a dance tune fan, I do miss having a few more up tempo numbers.

’The Violet Hour’ is a great showcase for Jackie Oates, and for the slower and more thoughtful side of folk music. However, whilst it is great when you are in the right mood, for me pace will usually win over grace.