Emily Portman - Hinge Of The Year 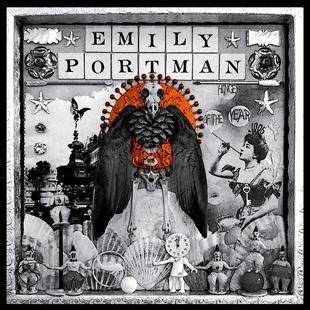 The title track is inspired by the character of Fevvers from Angela Carter’s Nights at the Circus, and the song certainly has its own healthy dose of magical realism. It’s a sprawling, beautifully balanced and complex arrangement, brimming with plucked harps and guitars, angelic harmonies, swelling, chocolatey cello and woozy saw. “There’s vodka and wine and there’s blood in the gutters”, sings Portman, perfectly capturing the dizzy, semi-sober world of the carnivalesque circus.

Although it’s based on an Italian lullaby, a brass-band backing gives Scorching Sun a homely, English feel. There is a measured, dignified sense of tragedy to the song, which tackles war from the perspective of a mother. It’s mature, stately and affecting.

There’s another change of pace for the final track. Moon Shines Bright is most reminiscent of Portman’s time in The Devil’s Interval, being as it is a neatly arranged, short and sweet harmony song, in this case a carol - a reminder that she can still do the traditional material justice.

The folk scene is already well acquainted with Portman’s lyrical poise and siren’s-call voice, and this EP simply confirms what an exciting talent she is. Contributions from Rachel Newton and Lucy Farrell (both in Portman’s touring band) add depth, illustrating the trio’s musical bond.

Hinge of the Year EP is a real treasure and does a great job of building anticipation for Portman’s next album, due next year. If you’re lucky enough to get hold of a copy, an added bonus is the stirring David Owen artwork - though if you’re not it’s available for download too.