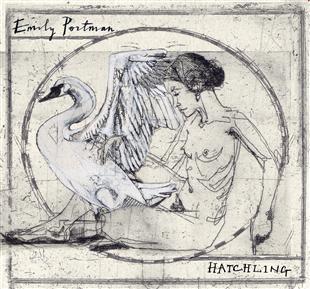 In her second album, Hatchling, Emily Portman creates a magical world full of characters from fairy tale and myth. There are sailors and mermaids, as well as characters from the Bible. She intersperses fragments of madrigals, nursery rhymes and lullabies, sung as if they were old-fashioned recordings, with self-penned songs.

Listening to Hatchling you feel that you are breaking into other worlds, plunging a thousand leagues beneath the sea or going through the back of the wardrobe in C S Lewis’ The Lion, the Witch and the Wardrobe, ending up in another land. There is a dreamy feel to Portman’s music which is irresistible and inviting.

Emily Portman has her own distinctive vocal style, with echoes of other possible voices such as The Unthanks and Laura Marling. Her songs mature with repeated listening and she has an unaffected voice.

Together with the two members of her trio, Rachel Newton and Lucy Farrell, they create a simple, pure and mysterious sound. Other contributing musicians are Lucy Deakin, the cellist from Methera, and guitarist Jonny Kearney.

Portman’s songs are the musical equivalent of Angela Carter’s works of fiction and fairy tales. They are modern yet rooted in tradition, and every song tells a story. In fact, Carter is the inspiration for two of the songs on Hatchling, Ash Girl and Hinge of the Year.

The opening title track Hatchlings, written by Portman, is a lullaby sung by Leda to her two sets of twins, accompanied by characterful banjo. Next comes the haunting song Hollin, a traditional verse to which Portman has added lyrics and a memorable tune accompanied by harp, cello and guitar. Hollin is an ancient name for the land of elves, commemorating the great holly trees that were supposed to grow there.

Hinge of the Year is a great title for a New Year’s Eve celebratory song. The image captures so well that sometimes smooth, sometimes creaky and even unhinged feeling of passing from one year to the next. The tune also evokes a feeling of celebration and freedom on a night out on the town.

The first of three traditional unaccompanied fragments follows, Hushabye Birdie, from a Scottish lullaby. Each of these excerpts punctuates the album. Like aural scraps of old painted-over wallpaper, they lie beneath newer surfaces, giving depth and roots to Hatchling.

Old Mother Eve is ’a subversive retelling of the myth of Adam and Eve in the form of a Somerset Wassail’. It has a happy feel to it that contrasts with some of the more haunting tunes.

In contrast, Jack, has a melancholy chorus. This song was inspired by ’The Wonder of Wonders’, an eighteenth-century broadside about a captain who slept while his crew battled through a storm to safety. His strange dreams persist when he awakens, and he is greeted by a mermaid. Each time Emily Portman sings the chorus, it is slightly slower and a little dreamier. She uses pace and pause to great effect.

The next short traditional piece that punctuates the album is Silver Swan, a madrigal by Orlando Gibbons. Lucy Farrell sings it beautifully with Emily Portman.

This is followed by three original compositions, Sleeping Beauty which speaks for itself and is accompanied by well-played strings bearing the hallmark of Lucy Deakin’s cello; Sunken Bells about a Cornish mermaid supported by Portman’s distinctive banjo accompaniment and harp; and Scorching Sun, featuring Alisdair Roberts, another key influence. The melody of this last song is pure and simple, and has a timeless feel to it, with its words slightly reminiscent of The Twelve Days of Christmas.

The last fragment comes here, Black Sheep, from an American lullaby, followed by a final lullaby ’for world-weary adults’, When You’re Weary. Portman wrote this song for her mother who requested a happy song, so she left out the verse about the werewolf!

Hatchling is an extremely listenable and enjoyable creation from a young musician well worth following.