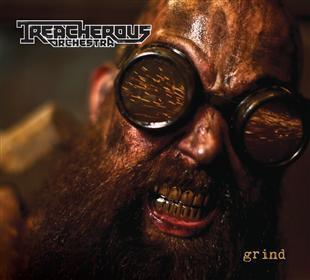 When it comes to bands and performers who know how to deliver the goods in a live situation, there can’t be too many who can step up to the plate and match Treacherous Orchestra. Contenders may try to hold a candle but might find the flame ignominiously blown out in a frenzied whirlwind of Celtic based tunes breathlessly merging into one another.

Such is the reputation that they’ve deservedly earned in the live arena, yet when it comes to reproducing the goods in the studio, they wouldn’t be the first band for which it becomes a task that even the most experienced can find too great a challenge, resulting in a watered down version of the excitement and exhilaration of the live experience.

Bagpiper, whistler and co-producer Ali Hutton has talked about “trying to create the intensity and power of the live sound on the new record” - not an easy thing to do, especially when the live version of Treacherous Orchestra is so powerful and potent. Bassist Duncan Lyall too has spoken of trying to effectively capture the liveliness of the stage show and the dense arrangements in the studio with the result that for the past two years, the band have toiled to bridge the gap between stage and studio in producing Grind.

With the new material taking on a darker industrial edge, the tunes have been composed simply and grown organically from the bare bones, before being formed into a final product, very much in the vein of the industrial processes at the heart of the philosophy of the record.

The artwork depicting the industrialized blacksmith - we’re not talking an idyllic rural retreat here, but hard nosed and heavy industry, blood sweat and toil being by words of the process - is a sound reflection of the vitality, urgency and spark which the band have tried to accomplish with the music on Grind.

The music evolves from mellow and natural acoustic vibes into hard hitting grooves which inspire and evoke the innate urge to jig about in an adrenaline-fuelled rush, just as the band encourage onstage. The way the tunes morph effortlessly into each other from one track to the next is a feature which the band have transported from stage to studio. You can play spot the join between the opening The Long Count (a smoothly unfolding soundscape reflection of times when things were much simpler) and Masters, the pairing developing into a ten minute frenzy before Adam Sutherland’s Halcyon Daze calms things down again.

It’s quite a feature how the eleven players can work together, each adding their own distinctive part to produce something like the jerky rhythms of The Sly One which, combined with the more industrial sounds of the second half of Banger, and the closing pairing of title track Grind and Numbers start to bring the Treacherous vision to account.

In the absence of bands such as Kan who did so much to bring the whistle into the fore of contemporary folk music, Treacherous Orchestra deliver a similar package in a big band/big bang format to celebrate the glory of the whistle and pipes. Considering their goal to establish an immediately identifiable Scottish sound, a sense of pride in being part of a nation of forward thinking people, then it’s mission accomplished.