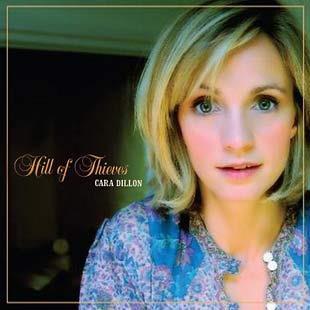 The arrival of the new Cara Dillon album is a curious thing. On the one hand there’s no doubting Cara’s standing in the folk scene. In particular, since her solo debut back in 2001 she’s been showered with praise and awards, and seen as one of the leading lights of the new generation of British folk. However, in my experience, whether in conversation at gigs or down the pub, it’s actually seemed rather difficult to find many people who like those earlier works - with reference being made to Cara’s distinctive voice.

For my own part, I’d somehow managed to avoid hearing any of Cara’s previous albums, which was probably a good thing as it meant I approached ’Hill of Thieves’ with no particular prejudices and no real idea of what to expect. Well, if Cara’s voice has been an issue in the past, then it’s been reined in, for on this CD, her singing is never less than beautiful.

The album opens with the title track, self-penned with partner Sam Lakeman. The song itself isn’t the best on the album, but it is a gentle introduction, and rises above the throwaway because of the accompanying music, in particular Brian Finnegan’s flute/whistle work. From thereon in the album is essentially a collection of traditional songs, but indeed, one of the things that stands out is the arrangement of the different tunes and the quality of the playing - something that particularly deserves mention given all the arrangements are by Dillon and Lakeman.

Stand out tracks include an incredibly effective version of ’The Parting Glass’. There is such a sorrowful lament to Cara’s singing that the song comes across less as a song of parting, and more of final farewell. While, for me, ’Spencer The Rover’ will always be associated with the late John Martyn, Cara’s version is spirited, upbeat and a worthy addition.

The album does sag a bit in the middle with a couple of numbers (’False, False’ and ’Jimmy Mo Mhile Stor’) that, while beautifully sung, drift by without really making much of an impression. However, it soon picks up again with two variants on the ’As I Roved Out’ theme, the footstomping ’P Stands For Paddy’ and the much more sedate ’The Verdant Braes of Skreen’, before ending with the enjoyable ’The Lass of Glenshee’ and the a cappella ’Fil Fi; A Run O’ - a stunning vocal which avoids the Enya-cheese I tend to associate with popular gaelic singing.

Overall, this is a beautiful showpiece of Irish folk, and a more than decent way to kick off 2009’s musical releases.

Released by Charcoal Records on 26 January 2009.