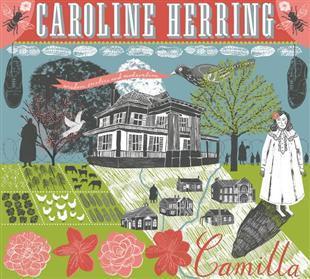 When she came over from the US to take part in the Cecil Sharp Project last year, Caroline Herring made a big impression on the folk scene over here - and it seems the feeling was mutual.

While her new album, Camilla, is named after a town in Georgia, there is a strong British connection, from a fine cast of guest musicians, to the cover art, which was made by London artist Alice Pattullo.

The sound is unmistakably American, though. Herring’s gorgeous Georgian drawl is a pleasure to listen to, while slurring pedal-steel puts the title track firmly in country territory. The song relates the true story of Marion King, who when visiting a friend’s daughter at the Camilla jail in 1962, was beaten unconscious by the deputy sheriff for singing and standing too close to the jail, causing her to miscarry. Herring plays it straight and steady, and the triumph at the end - King went on to become an attorney - is wearily sweet.

Herring calls the Cecil Sharp Project “one of the highlights of my musical career”, and the album includes her moving contribution, Black Mountain Lullaby. It’s a neater arrangement than on the C# album (which was, after all, recorded live) but wisely Herring has invited Jackie Oates and Kathryn Roberts to reprise their bright backing vocal roles, while Leonard Podolak is also back on the banjo. Another true story, it sensitively keeps alive the flame of Jeremy Davidson, a three-year-old boy crushed to death as the result of an industrial accident in Virginia in 2004.

Grief is also a theme of the reflective, breezy Summer Song and the more melancholy Until You Go. Gentle lyrics on hard-hitting subjects recur throughout this deeply socially conscious album. Maiden Voyage tells of a conflicted trip to Washington to (not) see the inauguration of Barack Obama, where lines remain drawn between “the privileged” and “the masses”.

White Dress is another key song. It merits its own sleeve illustration from Pattullo, but to a woozy, ethereal backing Herring paints a vivid enough picture of her own. The story of civil rights activist Frances Moultrie, who emerged from her burning Freedom Ride bus with her “white dress shining in the sun”, is a powerful one.

Fireflies is a simpler track, ’about a little girl chasing fireflies’, on which Herring’s Nashville Band kick up a stomping, bluesy backing. Fats Kaplin’s bold banjo picking is a particular thrill, while the use of chains as percussion is a clever touch.

Mary Chapin Carpenter and Aoife O’Donovan join Herring for some beautiful harmonies on Traveling Shoes, while Flee as a Bird - a Christian hymn, again with a fascinating back story, features lovely picked guitars, vocals and fiddle (Oates again).

Joy Never Ends (Auld Lang Syne) blends a modern lyric - based on conversation Herring had on a aeroplane - with some older words, courtesy of Robert Burns. It’s appropriately uplifting (to 76,000 ft, in fact), while the joining of the lyrics adds a note of timelessness.

Camilla is a soulful, warm record that successfully stitches together the voices of the under-represented and despairing with considered, often joyous music. Herring has proven she is as powerful a solo artist as she is a collaborator.