The Furrow Collective - At Our Next Meeting 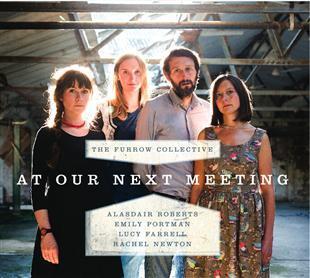 The Furrow Collective’s debut album At Our Next Meeting brings together some of the folk scene’s best known and loved singers and musicians, who have joined forces to produce music with an emphasis on story telling.

Lucy Farrell, Emily Portman, Rachel Newton and Alasdair Roberts are all artists in their own rights, having performed alone or in other ensembles. As such, this new and very exciting release - celebrating balladry from the finest folk traditions of both Scotland and England - is a real treat.

Each of the thirteen tracks on the album provides gorgeous vocals with very modest musical accompaniments, which are careful not to distract from the undeniably important delivery of the songs themselves. However, the blend of instruments ((harp, guitar, viola, concertina, banjo, fiddle and musical saw) which appear both throughout songs and occasionally at the end, demonstrates each member of the Collective as a fine musician.

Throughout the album, as much importance is given to the fragility and beauty of the solo voice as it is to the strength of the several. Each song is given an original arrangement with the four singers using varying layers of vocal parts to give the album interest and dynamic.

In King Henry Emily Portman is joined for fleeting moments by other voices, each enhancing the sound with sublime harmonies. This all adds to the atmosphere and theatrical element of the song which is a key part of successful storytelling.

The choice of songs makes the album accessible to all, particularly the likes of Hind Horn which has a pleasing refrain, inviting the listener to involve themselves with the singers, the song and the joy of balladry itself. Indeed some arrangements are more complex than others. The singing of Handsome Molly over Our Captain Calls at the beginning of the track - to highlight their similarities - gives us an idea of the levels of creativity and genuine passion for storytelling that has led to such a fantastic album.

The album is packed with stories both unknown and revisited. The sleeve notes suggest that each had arrived in the hands of the artists for very different reasons but this has ultimately led to a fine and diverse collection of ballads. The listener can expect tales of (amongst many others) highway men, the pursuit of love, the dangers of drink and the mining disaster in the Lanarkshire town of Blantyre (Scotland). Each comes with its own distinct and hypnotising melody and presentation which awakens the imagination.

With songs dating back to the 17th Century (Demon Lover) At Our Next Meeting certainly is a unique opportunity to celebrate the ballad form and its continuing success in the traditional music scene today.

At Our Next Meeting is an exemplary example of the importance and relevance of balladry in the 21st Century, specifically in its ability to satisfy the human desire to hear a good story.