The Willows - Amidst Fiery Skies 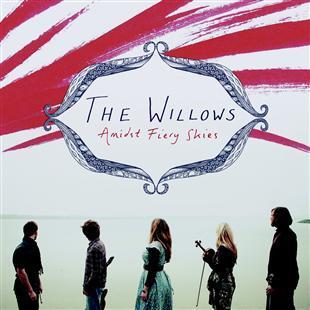 In their four years together, Cambridge five-piece The Willows has earned rave reviews from the likes of Bob Harris and Mike Harding, as well as a Spiral Award nomination for 2013’s debut, Beneath Our Humble Soil.

With Amidst Fiery Skies, the band leaves behind much of the Americana that drew perhaps unfair comparisons to generic alt-country acts and leans more towards the British tradition. With vivid narrative songs of land and sea, they explore themes of travel and adventure, hope, heartbreak and adversity.

Bill Staines’ Roseville Fair has enjoyed many renditions and was even honoured in parody by Les Barker. But The Willows play the song as it was intended, with Chris Wood and Andy Cutting’s arrangement proving irresistible for husband and wife fiddle/banjo team Prue and Cliff Ward, who are in fine form as the song’s couple dance all night.

Percussionist Evan Carson seizes his chance to work out on the rockier Johnny Robson, while Jade tells the sad tale of a ’lad in pain’. The pace slows again for Our Road, preparing nicely for the solemn guitar and fiddle accompaniment of Nineteenth Century Irish ballad Maid of Culmore.

Vocal duties are relinquished to Cliff for Shores, the first of two slices of Americana that follows a man’s new life in America and is set to hints of bluegrass banjo and Ben Savage’s dobro. Jade returns with Utah Phillips’ Goodnight Loving Trail, her gentle voice contrasting with the harsh realities of catering for cattle drivers over a 2,000 mile trail: ’It’s a wonder the wind don’t tear up your skin’.

There is deft musicianship displayed here, with clarity maintained throughout by co-producer Sean Lakeman, working with the band for the first time.

Balancing original material with covers and traditional songs, Amidst Fiery Skies is a thoroughly enjoyable and fulfilling progression from The Willows’ debut.