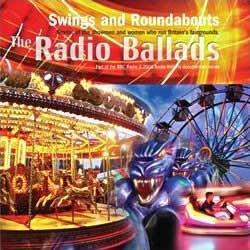 To mark the 50th anniversary of the first Radio Ballads project in 2006, the BBC commissioned a further 6-part series to document six of the biggest issues to face modern British society over the past half-century. Now digitally reissued, the episodes have been released exactly as they were broadcast - interviews and sound-bites combined with original compositions to paint a picture of modern British society.

Continuing our look at the series, we turn away from the overt conflicts and concentrate instead on some of the less publicised or talked about stories of our time.

I’m sure we’ve all, at some point, experienced the fun of the fair. But what of the people behind the rides? ’Swings and Roundabouts’ takes an intimate look at life as part of a travelling fair - from education, to the prejudice they’ve experienced to traditions within the community.

Ask any child and I’m sure they’ll reel of any number of things they’d rather be doing than sitting in a classroom. ’Scholars in Winter’ concentrates not only on the changing attitudes towards education within the travelling community, but also their work to educate others about the reality of fairground life. Tied together with Barry Coope’s simple but powerful chorus ’We were scholars in Winter and free birds in Spring’ the track highlights the physical difficulties but places it’s emphasis on the contributors who paint a more hopeful picture for the future generations.

Here today and gone tomorrow, most of us will only ever see the fair as a way to relax and have fun. But for those in charge of the rides and those growing up on the roads, the waltzers, dodgems and wheels are both their work and their home. ’Swings and Roundabouts’ offers a unique perspective of life on the road and reveals what happens once the punters have gone.

Originally recorded for the BBC in 2006 and released on CD on 04/09/2006. Re-released digitally by Delphonic Records on 02/03/2010. Part of a series of six plays, volume four deals with the traveling people who run Britain’s fairgrounds.