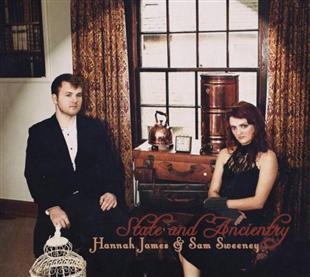 State & Ancientry is the second album from Hannah James & Sam Sweeney, and shows a growing confidence and mastery from two young but seasoned performers.

The opening two tracks are both instrumental tunes and, whilst they hail from Playford’s Dancing Master, they have an unusual and vibrant sound, with Parson Upon Dorothy in particular feeling a bit more Scandinavian in flavour.

The album is a balanced mix of tunes and songs, with some gorgeous versions of familiar tales. William Taylor has a sense of creeping foreboding, and a wonderful repeated twirly riff. In contrast, The Golden Glove has a more lilting tune that stays in the head to be hummed throughout the day, and sustains the six minutes of the track.

There Was an Old Lady Lived in the West is a stunning unaccompanied rendition by Hannah, and quite possibly the highlight of the album. She is in full control of her voice, and gives the song a slight jazzy swing which works so well to keep attention and enjoyment at the maximum. The love of the heroine shines through in Hannah’s voice - a true narration.

In contrast The Farmer’s Cursed Wife is a very silly song in the tradition of songs about terrible wives. It is an absolute giggle containing some great lines, and a nonsense refrain of “down a diddle a day”. But, whilst the subject matter is not serious, there is no slackening of the musical performance.

Hannah and Sam have delivered an accomplished and enjoyable album, which shows them expanding their range and confidence as a duo. The album is less immediately accessible to the casual listener than their first release, but well worth repeated listening to gain a fuller appreciation.