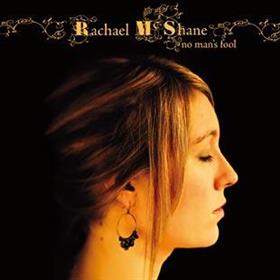 Fusing folk with other musical influences is not a new idea, even if those influences include jazz, funk or soul. Certainly Bellowhead’s ’Bruton Town’ is a bold statement, and other artists like Jim Moray are constantly pushing boundaries with their experimentation. It was therefore a surprise to me how different and exciting this debut effort from Rachael McShane is.

’No Man’s Fool’ features a string of strong women overcoming society and the odd highwayman (!), a refreshing change from the many traditional songs of women undone. Alongside we also hear from more familiar rogues/heroes like Captain Ward.

Several of the songs do tell familiar tales, including ’The Fisherman’ and ’Captain Ward’. With these two having been recently recorded my Maclaine Colston & Saul Rose and Spiers & Boden respectively, Rachael perhaps takes a risk by including them. However, whilst the stories, lyrics or tunes may be familiar, the different approach and direction give the songs a new feel.

That is what works so well on this album, the juxtaposition of the old and new, the familiar and the fresh. It is a shame to my mind that there is no instrumental track on the album. I would be very interested to hear how well the fusion of genres works without the lyrical overlay bringing everything together.

The standout track for me is ’The Fisherman’. The driving rhythm reels me in and will not let go. Rachael’s voice, not always completely to my taste on some tracks, also sounds wonderful recounting the meeting of the maid and the lord.

I came to this album uncertain of what I would find and fearful of whether I would enjoy it. Happily it is now high on my repeat playlist, and looks set to stay there for some time.

1. Captain Ward
2. The Highwayman Outwitted
3. The Fisherman
4. My Johnny Was A Shoemaker
5. Maid On The Shore
6. The Drowned Sailor
7. The Gardener
8. The Broomfield Wager
9. Miles Weatherhill
10. Shepherd Lad