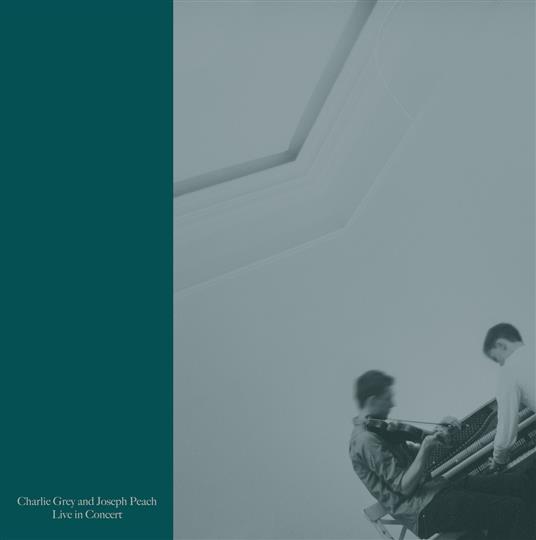 After their journey through some of the most remote islands in the Outer Hebrides, culminating in the highly acclaimed Air Iomall, Charlie Grey and Joseph Peach went out on tour, enchanting their audience with their inspirational compositions and their very personal rendition of traditional tunes.

Live in Concert is a selection of recordings from two of their gigs: one at Wick’s Lyth Art Centre, the northernmost concert venue on the British mainland, in November 2019 and one at Glasgow’s City Halls during Celtic Connections 2020.

The haunting Còig Peathraichean Chinn Tàile kicks off the selection with its mellow tones and calm stride before the duo moves to The Shores of Loch Gowna, a track where the well-known Irish jig stands between a delicate start and a final jig to climax. There are, as one could expect, some highlights from their Hebridean trip: Donald MacLeod, King of North Rona and The Big Islands are performed with the enveloping elegance that is the trademark of their musicianship.

The second half of the album, as in Air Iomall, has a slightly more active pace whilst being consistent in style: The Burnt Leg, Strathspeys and Is it the Priest? are more dynamic medleys that surely engaged delighted spectators during those remarkable occasions.

No listener that has encountered Grey’s distinctive fiddle playing can remain indifferent to its peculiar timbre and its refined expressiveness. All of these features, together with his unique use of slides, are present in the duo’s live performances recorded for this album.

However, there is no shortage of contribution from Peach: his exquisite, slightly jazzy, and very sensitive piano playing is not only an accompaniment for his musical partner, it gets the spotlight in the same measure; tracks like The Big Islands and The Shores of Loch Gowna feature some astonishing passages revealing all his musical sophistication and the depth of this artistic symbiosis.

The unmistakable warm intimacy of their concerts is the icing on the cake, with perfect acoustics magnifying evocative compositions of timeless daintiness, something every musician can get inspiration from. They don’t necessarily look for extreme virtuosity, they fluidly communicate with each other as well as with their audience, portraying vivid images of a wild nature in the listener’s mind; and this is especially thanks to the very natural and yet thoughtful interplay between two musicians of a profound artistic sensibility.

Released digitally on Bandcamp on 10 April 2020, recorded and mixed by Joseph Peach, mastered by Mattie Foulds