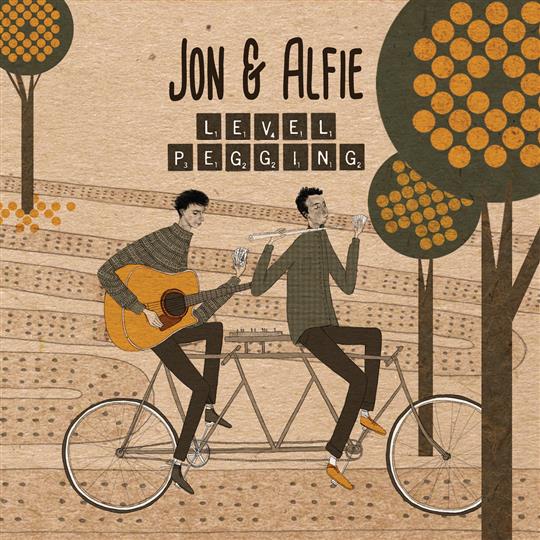 Jon Dyer and Alfie Gidley formed their flute and guitar duo whilst at Falmouth University. Brought together by their love of folk tunes they have combined their, not inconsiderable, talents on this short album of eight tunesets.

What makes Jon & Alfie stand out from the pack is not only their understanding of the tradition, exemplified by their rendition of Mike McGoldrick’s Farewell to Whalley Range, but their subtle questioning of folk music idiom.

Take, for example, their version of the English folk tune, Old Lancashire Hornpipe. Coming out of the atmospheric Ali Brady’s, the time signature of this 3/2 hornpipe is pulled about by laying the stresses on the first and the fifth beat which gives the tune a loping quality. Married to this is Gibley’s strumming which seems to be in a different time altogether.

Of course, this messing about with time signatures (Waterman’s moves from 7/8 to 4/4 and back to 7/8 again) matters very little if the musicianship is not of a very high standard. On this score Jon and Alfie have nothing to worry about. Dyer’s flute playing is rock solid whist Gidley’s guitar work is extraordinary, moving seamlessly between jazzy riffs and gentle accompaniment.

All this comes together on the final tuneset of this album, Jodies Swivel/The Butterfly. This has a swing feel with the guitar playing off the beat, with some finger clicking added for good measure, before being joined by the flute.

On The Butterfly, Gidley swaps his guitar for a banjo which gives the tune a slightly North American flavour. As with the majority of the album both tunes are taken at a steady pace and are all the better for it.