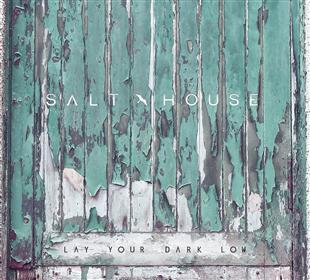 Salt House are able to boast two BBC Young Folk Award winners, and a Scottish Jazz Award winner. And Lay Your Dark Low is an album worthy of all their prestigious titles.

It opens with Strong Dark Souls which is an original track, featuring dulcet Scottish tones, with a wonderful lilted voice which stays with you throughout the album.

Little Birdie is a classic traditional song in which Miller’s soaring vocals mimic the the rise of the bird and this movement is also reflected in the fluid string part, where long bow strokes are reminiscent of soaring. A very simple track with very well composed accompaniment which grows from a traditional song into an original composition.

The tone which had been light and gentle to begin with darkens with She’s Like The Swallow, but what else would you expect from a traditional song about a maid whose lover takes delight in everyone and whose tale ends in suicide. It begins at a sombre pace with rising and falling strings but by the third verse it gains momento as the story becomes more dramatic. The story telling in the vocals and the drama in the instrumentation combine to produce a wonderful story telling technique.

The band have really succeeded in singing and telling such wonderful stories, and it is wonderfully impressive that this talent continues in original compositions. The stories told in them sound as genuine as the ones passed down by generations.

Setting Sun is one of these original numbers and is a fresh sound, and the steady bass-line echoes the theme of moving forward and moving out of the shadows which marks this track. It is a serious contender for the strongest track on the album and is reminiscent of old travelling songs.

The original content continues with Open Water; Euan Barton’s own composition again follows the theme of continuing on, pressing against time, and the relationship between the past and present. It is slightly more sombre than Setting Sun as it questions the unknowing of the future. It’s dark and pretty simple, but that doesn’t prevent it from being seriously beautiful.

We then return to the traditional numbers. Katie Cruel is the type of song whose subject matteris most enjoyable, along with She’s Like the Swallow. A beautiful woman travels from bed to bed and thus gained a reputation so is now known as Katie Cruel. The mystery of the protagonist is well acted in the vocals, and the harmonisation in the chorus is really delicate but achingly sad. The track then continues with another Ewan McPherson composition which follows a very similar tune as the song and ends the track wonderfully.

The Seer and the Lord is another wonderful story, though this time it’s an original composition. The opening is very similar to Sir Patrick Spens, but the story slowly unwinds helped along with some very charismatic syncopated accompaniment.

Morning Train moves away from the folk a little, and picks up a more bluesy and americana sound. There’s nothing wrong with that per se, it’s just that as a wonderful Scottish folk group their strength really stands in the beautiful clarity of their sound and they don’t need to prove that they are good at other genres. But on the other hand to produce an album on which nine out of ten of the tunes are sublime is a pretty impressive achievement.

The final track She Walks In Beauty is simply another beautiful number. It takes its main lyrical content from the Byron classic poem found in every Love poetry anthology in the country. However Salt House have totally transformed the romantic poem of a scandalous aristocrat which is fairly praised into something more transcendent. It is exceptionally beautiful. The vocals, and the instrumentation, and even the ethereal humming. It is a truly haunting track and I found myself reaching out for her graceful form.

Salt House are really very good. In Lay Your Dark Low they explore so many stories and so much content. The purity of Miller’s vocals cut through with such sincere beauty and wonderful accents. The instrumentation on all levels either accompanies the vocals perfectly or tells the story independently. Never too over-powering but always brilliantly present. They are a seriously talented group of musical raconteurs.