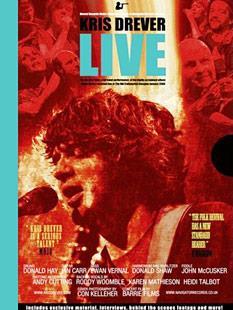 The tracklisting of the DVD is primarily that of Drever’s solo CD ’Black Water’. In fact, the only track missing is the gorgeous Fause Fause. I could bemoan the loss of such a good song but instead we are treated to Shady Grove, a song that Drever infects with so much excitement that it is easily the highlight of a great set overall. Aside from that Honk Toot makes a welcome change of tempo, and really allows Drever to showcase his excellent guitar skills.

Recorded at Celtic Connections, the accompanying musicians read as a heady who’s who - John McCusker, Heidi Talbot and Ewan Vernal to name a few. This was the first full band outing for Drever’s songs. However, the festival feel fails to fully come across, and I do wonder whether a different atmosphere might have been in evidence if this had been purely a Drever gig. The audience are appreciative, but I don’t get the feel of an entire audience in raptures. Which is a shame, because, on the evidence of Drever’s performance, he deserves it.

The extras are a mixed bag, mostly interviews with the band members on how they met Drever, and the rehearsal process before the gig. We are given the opportunity to choose our camera angles as we watch Shady Grove - a nice idea, but not one my DVD player was particularly quick at doing. Perhaps the highlight is a short interview with Lau, who seem incapable of being serious (which I definitely mean in a good way).

A great concert and a good DVD. Hopefully some of Drever’s other projects (Lau, Drever McCusker and Woomble) will get similar treatment.