Sam Carter - How The City Sings 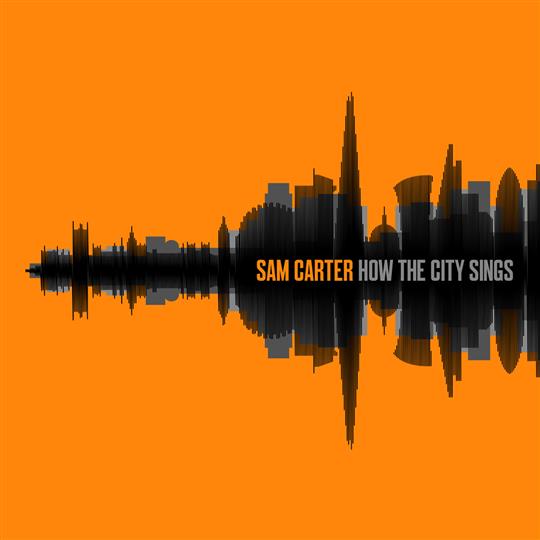 Since taking 2010’s Best Newcomer Folk Award, Sam Carter has grown into a different beast. It’s been quite a journey; one which has taken him to places far and wide, working with musicians across genre hopping boundaries, yet whatever the journey, it’s brought him home to his native land.

To London, a place he’s called home for a while and which has shaped his new record in many ways. He’s talked about it being the right time to make this album. An album he was ready to make, maybe one he needed to make and one which he’s said gathers together “songs about the city and how it sings.”

Onboard the Carter train are producers Dom Monks and Neil Cowley (of the Neil Cowley Trio no less); the latter’s keyboards litter the album along with the sounds of his drummer Evan Jenkins, plus Sam’s regular bassist Matt Ridley and Sam Sweeney, who seems to be finding his omnipresence over all good things folk now extending to the Carter band.

Acoustic or electric? Why not both? And Carter has got the balance and dialled in the combination right. Dylan might have been tagged as a Judas when he plugged in in days of yore, but people are much more forgiving these days. Sam Carter has brought the balance back in a collection of songs which are personal and intimate, and housed in a sleeve showing a city skyscape as soundwaves - the perfect accompanying image - as the music and sentiment ebbs and flows in peaks and troughs in a striking piece of work.

So what’s different about the Sam Carter of 2016? No longer is he the amiable befringed folk singer armed with a guitar and his take on traditional song. He’s grown into a sharply aware (and sharply coiffured) observer and chronicler of the contemporary, although there’s the inevitable trad. song in there. He’s not afraid to delve into the intimate and personal as well. In fact there seems to be a theme developing in current folk albums. Where Kris Drever’s recent If Wishes Were Horses took inspiration from the change in a move from the city to a less urban and more tranquil lifestyle while chronicling a deeper more personal time, How The City Sings treads a similar path. Chronicling a rite of passage, life decisions and life experiences seems to be becoming de rigeur for the modern folk singer. That’s if you want to prise Carter, Drever et al into that category anymore.

Triggered partly by the end of a relationship, Carter taps into the folk artist confessional from the off in From The South Bank To Soho. The is the scene setter; the overture to what’s to follow. A narrative following a couple through London - a love triangle compounded by the city and the need to make choices, and delivered in a familiar Carter tone - a mournful Sweeney string draped across the song. It’s intensely personal; he sings “I have to let her go because I love her”, about holding onto this town for too long, being bonded by wanderlust and standing between two platforms. The depth of analysis could go on, digging into the Carter psyche to explore the inferences and allusions. It’s a monumental opening track.

Immediately shaken out of the reveries by something at the other end of the scale is Dark Days - a contrast if ever there were one - what sounds like a hammered dulcimer winking in the background giving an Eastern European flavour to a full band latching onto ska rhythm as they join the fun and games. Maybe the result of having the fire in his belly stoked with Jim Moray and pals in False Lights, the electric guitar is out in force again providing a solo distorted backing in a brief nod to the traditional in The Grieved Soul, while Drop The Bomb develops into a full out rock event. Neil Cowley’s stabs of organ and the drums of Evan Jenkins making the sort of telling impact which shifts this into heavy folk rock territory; it’s all folk social comment accompanied by the ’joyful racket’ personified by False Lights.

The same goes for Taunting The Dog, which sees a forceful Carter venting his spleen and once again a shimmering organ and rolling drum part taking the song a bus ride away from folk roots. The only complaint - it fades out too early.

The social comment continues too with Haringey Lullaby - the Baby P case providing a chilling backdrop to a song which is what it says on the tin - a lullaby which resonates and chills, encased in a velvet glove and a musical calm similar to the title track. The latter accompanied by piano, closing the album and sealing the deal on what is a significant album: for Sam Carter, for 2016 and for folk music.