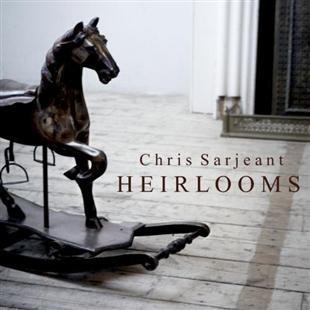 Chris Sarjeant’s debut album takes a number of songs learnt from his folk singer parents, alongside other favourites of his own, to create an album of "Heirlooms" which also manage to sound fresh in performance.

Chris’ voice has elements of Nic Jones, and also of other young performers like David Gibb. It has empathy, emphasis and authority, all in just the right measure, whether lamenting Lord Marlborough, or cheekily singing of Wanton Seed. It is easy and pleasant to listen to.

Heirlooms opens with Bonny Labouring Boy, which begins with some electronic percussiveness, but this is deceptive; in reality the song, and the album as a whole is unashamedly acoustic, and all the better for not being overcomplicated in its renditions.

It is also an album with a lot of guests, but none of those featured (no matter how illustrious in their own right) overshadow the central flow of the album, and sense of Chris’ interpretations. In fact, it takes repeated listening to really spot all the guests and the lovely delicate contributions they make.

The exception (in a good way) is Jackie Oates, who duets with Chris on Streams of Lovely Nancy and Bay of Biscay. Their voices gel together so well, and it can only be hoped that there will be an opportunity to see this combination live at some point. Particularly in Streams of Lovely Nancy there is just such a pleasing intersection of these two bright young folk.

As well as having a fine voice, Chris is a very accomplished guitarist (dare I say it) in the style of Nic Jones. He is percussive, inventive, intricate... the praise could go on! In Our Ship Lies in Harbour he puts down wonderful rhythmic, driving guitar, whilst a track like Coast of Barbary gives a more jaunty aspect alongside the concertina.

One particularly striking track is Rambling Robin, performed very differently from the recent Spiers and Boden version, and containing more in the way of pathos, all wrapped up in a very engaging tune.

On the basis of Heirlooms Chris Sarjeant should definitely be a name to watch, and to catch whenever you can! Roll on album number two!