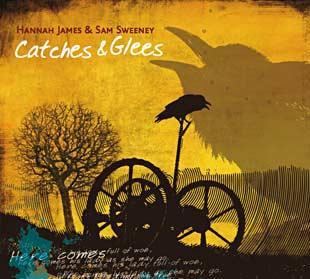 Hannah James and Sam Sweeney first played together in the group Kerfuffle in 2002 but you might also know them from their separate work with Bellowhead and the Demon Barber Roadshow. Catches and Glees is their debut album as a duo but has a confidence and assuredness that belie their young years. The sound is dominated by Sam Sweeney’s fiddle and the sweet and distinctive voice of Hannah James but peppered here and there with nyckelharpa, pipes and clogs.

There are lively, foot-tapping instrumental tunes such as ’Dick’s Maggot/Dog Leap Stairs’ and ’Catches & Glees’ itself, together with the more mournful ’You are the One’ & ’Polska’.

The vocal tracks are new arrangements of traditional material and cover the typical subject matter of folk songs. Death (’Died for Love’), lost loves gone to sea (The Young and Single Sailor), and the pleasures of rotting in jail (an excellent version of the traditional ’Gaol Song’) are all covered here, and done very well.

Highlights include the album’s impassioned opener Gaol Song with it’s tale of a young man hauled before the magistrate and sentenced to hard labour and in a complete change of pace a superb ghostly version of the ancient ballad of the Three Ravens.

This is a album of traditional material performed by two of the brightest young stars of the folk scene and throughly enjoyable to boot.

Released by RootBeat Records on 19 October 2009.