John Tams - The Enemy That Lives Within - The Radio Ballads 2006 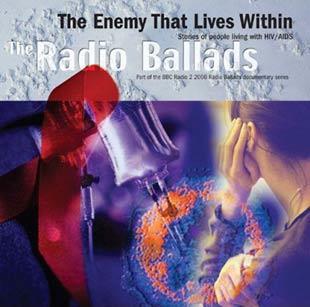 And so, the final Radio Ballad, which steels itself to face ’The Enemy Within.’ It’s 20 years since AIDS was first recognised by the authorities in the US, and while great strides have been made in controlling the symptoms, there is still no cure. In this, the final Radio Ballad, the BBC look at the effect the disease has had on the lives of people from across the social spectrum.

By far the most poignant of all the songs is Chris While’s ’Come the Hour’, which focuses on the reactions and emotions felt by each of the interviewees when the hour came to tell their loved ones and partners of their diagnosis. From the outset, the soft piano accompaniment and Chris While’s haunting voice set a mournful tone as if, in the words of one contributor, ’someone has passed away.’

Music has the power to express ideas that it is hard to put into words. The 2006 Radio Ballads have shed light on six important social issues, while at the same time emphasising the strong human element behind each of the stories.

So often called ’the silent killer’, HIV/AIDS affects over 33 million people worldwide. With candid interviews from those directly affected, ’The Enemy Within’ puts a human face to the epidemic for an insightful and informative depiction of daily life with the disease.

Originally recorded for the BBC in 2006 and released on CD on 04/09/2006. Re-released digitally by Delphonic Records on 02/03/2010. Part of a series of six plays, volume two deals with modern stories of the people living with HIV/AIDS.