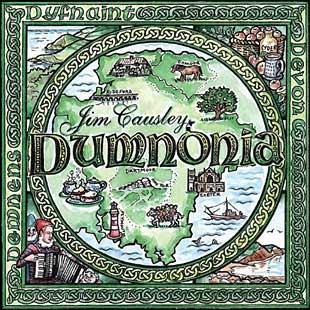 Devon is a country full of traditional song, some well known, some less so. With Dumnonia Jim Causley strives to shine a light on the county’s hidden treasures.

When I Was Young is a who’s who guide to the highways and byways of Devon. In no particular order the protagonist takes on the various jobs associated with different parts of Devon (and Somerset), and this acts almost as an introduction to the county.

In many of these songs, the tales are told in the first person (or as near to it as possible), and it’s truly astounding how effortlessly Jim is able to switch between the various characters who crop up throughout the album. Almost like an actor, his voice truly brings the characters to life, whether they be ridiculous like the parson in the Tythe Pig or tragic like the swimmer in Royal Comrade. He is a true master at work.

The Sidbury to Stockland Set gives Jim and his fellow musicians, including Bellowhead’s Pete Flood on percussion, a chance to let rip musically.

Variety on this album doesn’t just come in the type of material Jim has chosen for this album, but also in the age of the songs themselves. Devon’s railways were devastated by Dr Beeching’s railway cuts in the 1960s, the reality of which comes to life in one of the more modern offerings contained within this 18 track album. In the Sidings speaks from the perspective of a station master about to lose his job. ’Come shake hands with an overhead’ he sings, a feeling that is still hugely resonant today.

In contrast The Tythe Pig was collected by Baring Gould in the 1800s, and adds some humour to the end of the album. We have all been warned of the ills of being too fussy, as demonstrated by the parson in this narrative. It’s a hugely catchy tune, and it’s clear from listening to the song that Jim takes delight in recounting the parson’s mishaps as he attempts to collect his tithe in the form of a suckling pig, which makes it all the more listenable. Brilliant!

A massive undertaking, but a fabulous result, Dumnonia is a credit to Jim’s understanding and sympathy with traditional song, but also of his home county of Devon. It is a fascinating insight into the treasures hidden within, but also of how songs change from region to region within the UK. The album is an absolute gem.