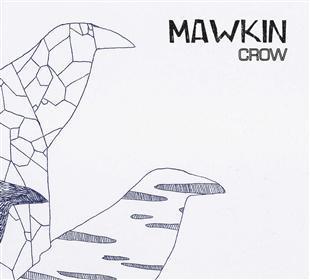 When Mawkin:Causley split towards the end of 2010, we wondered if and when we would hear from this fine bunch of musicians again. The good news is that Mawkin are back! Crow is a fine collection of songs and tunes to mark their return.

The album begins with an exhausting pair of tunes, Skymningspolskan / Betsy Likens. The first of these is Norwegian. Another Scandinavian tune, Rannalla, a Finnish tango, appears later on down the track list and gives Nick Cooke the chance to show off some funky melodeon playing.

In fact, the tunes take you on a musical Grand Tour - with tunes from France - The Hornet (written by Dave Delarre, and you really can hear them buzzing) and the traditional Breton tune Andro, and the mazurka Jeux d’Enfants. Some Eastern European influences turn up too, in the multiple time signatures of Ambiguity.

The lads compose as well, with Nick, James and Dave making their contributions to the album. James’ edgy fiddle playing comes to the fore in his tune Pirate’s Blessing , named after a beer he traditionally brews for Christmas and New Year.

So how do Mawkin move forward with Jim Causley? The answer is to invite guest vocalists to sing on the album - here you will hear Steve Knightley singing one of his own songs (It’s All Quiet) and Eliza Carthy singing a deliciously sleazy Bad Girls Lament. The aforementioned Mr Causley makes a welcome return in the final track, The Ringers of Egloshayle, a traditional song from Devon. Dave Delarre sings one song Harry Rag (originally recorded by the Kinks), which has definite echoes of The Lollypop Man sometimes performed on stage by Mawkin:Causley.

As well as tunes from different cultures, you will hear a range of styles - Easter Thursday passes through prog and gentle jazz before returning to its Playford roots, while Diogenes bounces along to a ska beat. The album ends with a lively jig that will have you leaping around the room. Drummer Lee Richardson seems to be having a great time!