John Tams - Ballad Of The Big Ships - The Radio Ballads 2006 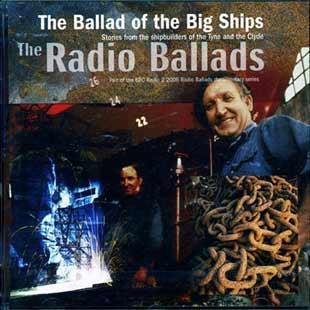 Looking at the decline of the shipyards of Tyne & Wear and Clyde, ’The Ballad of the Big Ships’, like ’Song of Steel’, charts the breakdown of a huge regional industry.

Karine Polwart captures the bittersweet emotions of launch day, with the stunningly beautiful ’Hold Back the Tide’ as the shipbuilders describe their pride but also loss watching the liners slide down into the water - ’It was like one of your beloved daughters leaving home’. And yet alongside the reminiscence and the nostalgia there’s no getting away from the line ’the big ships are gone now, there’s no more to tell’.

This session also sets two of Brian Whittingham’s poems to music. Read by their author, ’The Apprentice’ and ’The Dustman’ tell of his life as a steelworker in Clyde both as a young apprentice and on building the QE2. Accompanied by the same mournful trumpet tune, Brian’s gruff Glaswegian accent brings the poems to life, recounting the highs and lows of life in the dockyards.

It would be impossible to count just how many people have been affected, and still are affected, by the decline of shipbuilding in the UK. As so many of the contributors note over the course of the radio ballad, ’to have a trade behind you’ meant you had a job for life. But as ’The Ballad of the Big Ships’ so vividly describes it’s now ’just a memory’.