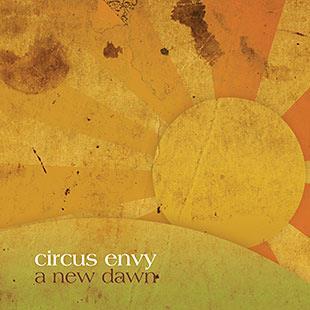 The second release from the self-proclaimed ’best band in Hull’, A New Dawn is an intriguing mix of the traditional and modern, with a definite lean towards the nu-folk spectrum.

Featuring Kerfuffle’s Sam Sweeney and Hannah James, ’Three Score and Ten’, is one of the stand-out tracks from this 5-song EP. Without a violinist in their ranks, Sam’s unmistakable rhythmic fiddle playing seeks to fill the void, continually driving the music and the story forward. In contrast, however, Hannah’s accordion lurks ominously in the background, echoing the harrowing tale of the sailors who drowned in the ’Dreadful Gale’ in 1989. With such a secure musical foundation, Circus Envy build up the tension, using a mixture of solo voice and close harmony singing to deadly effect.

The title track ’A New Dawn’ takes the story-telling elements of the folk genre and mixes it with a decidedly alt-rock/indie melody. The resulting creation is an intriguing ballad complete with a haunting piano and string accompaniment.

In contrast, however ’The Game’ again shows off their combined vocal talents, but in a much more structured context. Gone are the melodic strings and instead a solo guitar and a varied percussion line pick up the slack, over the top of which, the three vocalists weave in and out of each other with ease.

Produced by the incredible Stu Hanna (Megson), ’A New Dawn’ is a highly professional offering from a band who clearly have a bright future awaiting them.