The Askew Sisters - Through Lonesome Woods 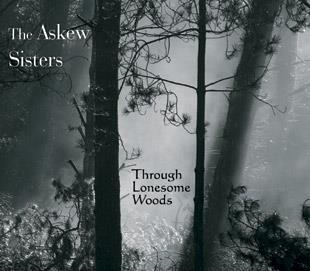 Three years after their critically acclaimed début, ’Through Lonesome Woods’ cements The Askew Sisters’ reputation as shining stars on the British folk scene.

The title track is partnered with the traditional Morris tune ’Saturday Night’ for the album’s highly evocative opening track. Making the most of the melodeon’s long sustained notes the pair set a mournful tone, which captures the essence of both the story ’Through Lonesome Woods’ and of the bleak forest, which adorns the album, cover.

The pace changes instantly however, as the pair launch themselves into a set of tunes. A pair of Morris tunes separated by a country-dance, you’d have a tough time dancing to ’The Blue Eyed Stranger/ Goddesses/ Mrs Carey’ at this speed! Known for their energy, the various tunes demonstrate their respective instrumental talents and impressive musicianship.

With ’The Bonny Bows of London Town’, the pair delves into the dark underside of the capital, albeit not as gruesome as some versions would have it! Nonetheless, the result is one of the stand-out tracks from the album. The haunting tone is set from the very beginning, with Hazel’s crystal clear vocals telling of a sister’s plot to do away with her fairer sibling, while underneath Emily captures the tense atmosphere, making the most of the lower register of the violin. Simply breathtaking.

In their cover notes The Askew Sisters describe the story of ’Lord Bateman’ as a “bit of a gap year”, and their version of the Child Ballad reflects the adventurous nature of the ill-fated Lord’s travels. As well as being beautifully crisp and clear, Emily’s vocals are also highly sympathetic to the emotions at play throughout the story and so you can hear the playful determination in her voice. Truly uplifting, this is a beautiful version of a well known story.

An entirely traditional collection, the album is a beautifully balanced mix of the mournful and the upbeat and with extensive cover notes, the Askew Sisters demonstrate their grounding in the traditional tunes they have chosen to appear on this, their second album.