Spiers & Boden - Through & Through 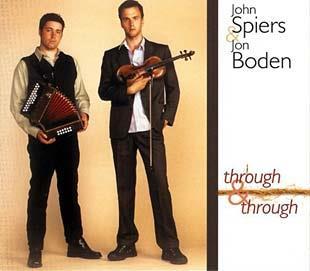 Back in 2001 when two unknown musicians released their first album Through and Through no one could quite predict the influence they would go on to have on the folk scene of 2013. The reissue of this debut album (which has been unavailable for a while) has truly stood the test of time, and still sounds as fresh and interesting today as it did back in 2001.

The debut offering from Spiers and Boden mainly features traditional tunes and songs, with a couple of original compositions thrown into the mix. Even at this early stage in their career, Spiers and Boden set up a very strong sound of their own - with the stomp box becoming almost a trademark feature of their set. From this earliest album, they seem able to create almost a full band sound with just two instruments and their voices - a trait which they have carried on and developed as their careers have grown.

Part of Through and Through’s charm is its slightly rugged, live feel, which only enhances the feeling of great musicianship involved in putting this album together. With a great mix of songs and morris tunes arranged in a lively and energetic way, it is no surprise that this album grabbed the initial attention of the folk world back in 2001. I’m sure they will continue to hold our attention for many more years!