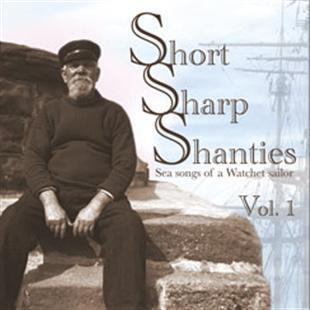 The first of a series of three albums to be released, the shanties contained are all from the repertoire of John Short from Somerset, who gave Cecil Sharp nearly sixty shanties.

The shanties have been recorded by a variety of artists, including shanty veterans like Jim Mageean and younger stars Jackie Oates and Sam Lee. This gives a real variety to the album, with both traditional takes on songs, and more innovative arrangements.

Both Jackie and Sam take the lead on two tracks, with widely different styles resulting. Sam’s more vibrato voice works really well on Mr Tapscott, a song better known to some in a different version as Plymouth Girls or New York Girls.

There are a lot of rousing harmonies for the listener to sink their teeth into, but shanties are not the easiest things to penetrate if you are not a fan.

That is where the final track, Tommy’s Gone Away sung by Jackie Oates, really comes into its own as a bridge into shanties. Jackie’s gentle voice drifts across, lamenting the loss of Tommy to the sea. It is refreshing at the end of an eighteen-track album to hear the woman’s perspective.

It will be very interesting to hear what the other two installments of Short’s shanties will contain. This album certainly seems to be the basis of a great grounding in seafaring music.