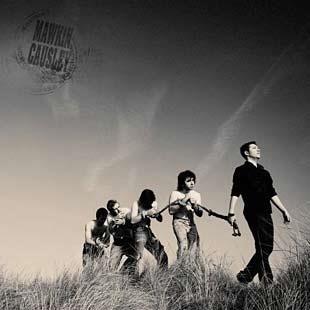 The EP gets off to a surprisingly good start with the track ’George’s Son’. I say surprising because, while I’ll admit my infant self was once moved to tears by Elvis’s Old Shep, a song about sheepdogs wouldn’t normally strike me as that promising a subject. However, Mawkin: Causley carry it off through a combination of a commanding vocal and a rousing fiddle-driven tune. The strong start continues with the vengeful transportation-themed ’Botany Boy’. Both of the openers are excellent on CD but also sound like they should go down a storm live.

For me, it then drifts a bit. I can’t fault the playing or Jim Causley’s singing which is never less than superb, but both Mariners and Come my Lads strike me as, well, filler - they’re not bad but there’s nothing about them that really grabs you either. That said, Come my Lads is a song which I can imagine going down better live - not unusual for a drinking song! The same is probably true of the instrumental Cookie Monster (I should hold my hand up and say that with the exception of some classical music and certain Canadian prog-rock, studio - as opposed to live - instrumentals rarely do anything for me).

However, the CD then returns to a high with the final track, the nicely dark New York Trader.

Overall - and coming to the band new - I found this an enjoyable 20 minute’s listen, certainly with enough potential to make me want to explore Mawkin: Causley’s work more, and particularly to try to catch them live sometime.

Released on 4 August 2008 by Navigator Records.