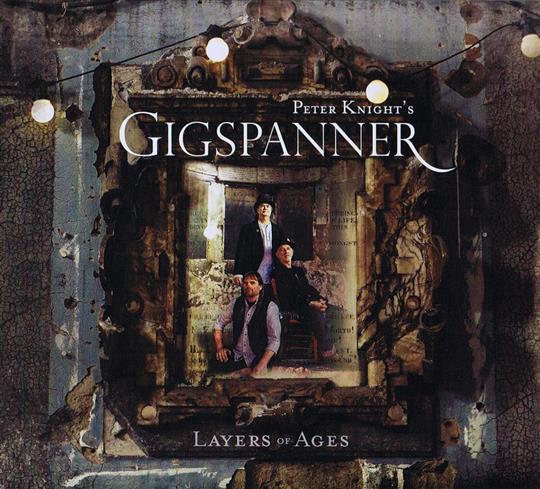 Peter Knight left Steeleye Span in 2013 after more than 40 years with the band. He started playing with Roger Flack (guitar) and Vincent Salzfaas (congas and djembe) around 2006 and Gigspanner was formed. The first Gigspanner album, Lipreading the Poet, was released in 2009 and since then the band’s following has grown steadily with several tours happening annually. Layers of Ages is their third album and is as full of virtuosic playing as its predecessors.

Rather fittingly, the opening track is Bows of London, a version of Two Sisters in which the bones of the murdered sister are turned into a fiddle.

Death and the Lady charts a sinister conversation between a young woman and the Grim Reaper. It starts mournfully at the lower end of the fiddle’s range and the melody comes in initially on guitar. The driving, rhythmic playing on fiddle supported by the percussion form a firm foundation for the vocal line.

Peter seems to favour songs which tell a story. As is the case in all of the songs, there is an extended instrumental passage to Death and the Lady. This begins in an ethereal mood, before the driving rhythm on rock guitar joins in, building up to an intense climax before finally dying away.

Another beautifully executed song is The Week Before Easter, which deals which the age-old problem of lost love. This also contains a lovely instrumental interlude.

Always popular in live sets is Louisana Flack, Peter’s own composition in Cajun style. This features Roger playing “fiddlesticks” on Peter’s violin and is a live recording.

A couple of songs which have formed part of Steeleye Span live sets appear on this album, but in very different forms. Mad Tom of Bedlam (Trad arr Nic Jones/Dave Moran) is quite upbeat in spite of the subject matter. Lovely harmony vocals begin the song, inviting the curious to “Come and see for a penny”. The solo voice comes in over the top. The fiddle accompaniment varies throughout the song, with pizzicato playing in the first few verses, changing to bowed later on. A fabulous guitar solo provides an interlude, with the fiddle taking over, before returning to a reprise of the first verse. The song ends as it began with “Come and see for a penny” followed by the chorus sung a cappella as a round.

Hard Times of Old England often finishes a Steeleye Span set and here finishes the album. This is a much gentler arrangement of what is essentially a sad song and again contains a long instrumental before the final verse.

The musicianship on this album is outstanding, with so many diverse influences coming together to form a coherent whole.

1. Bows of London
2. She Moved Through the Fair
3. Death and the Lady
4. Mad Tom of Bedlam
5. King of the Fairies
6. Louisiana Flack
7. A Week Before Easter
8. Down by the Salley Gardens
9. Hard Times of Old England