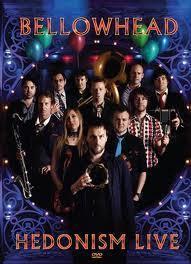 Nothing can beat the experience of seeing Bellowhead live but as they don’t tour constantly, some of us need some way of getting a regular” fix”. Having a gig on DVD is rather like seeing the band at all-seated venue - you can concentrate on the sound (difficult when jumping up and down in the mosh pit) and hear things you may not have noticed before. Indeed the sound is so clear, there have been a few auditory surprises!

The way the cameras home in on different sections of the band allows the viewer to see their antics at close quarters - trying to watch all of them at once at a gig can be like watching a rather chaotic tennis match.

As the title suggests, the DVD mainly features tracks from the band’s most recent album, Hedonism with appearances from the band’s other recordings. Capturing Bellowhead’s infectious exuberance on film is not an easy task, but the film crew have done a grand job here.

Of course, a Bellowhead gig is not all about leaping around - there are calmer moments, such as the haunting Cold Blows the Wind (featuring Jon Boden on thunderbox), the beautiful Captain Wedderburn and the atmospheric Amsterdam, which is filmed here in monochrome with just Jon’s pink tie picked out.

A few tracks also appeared on Bellowhead’s previous live DVD, Live at Shepherd’s Bush Empire but they have developed from those versions - Across the Line for instance has a delicate new introduction from the strings, and it is a treat to hear it back in the live set.

No Bellowhead set would be complete without a few rousing tune sets, so Sloe Gin and Haul Away are welcome inclusions, as is the audience favourite London Town. Frog’s Legs and Dragon’s Teeth has to be there as an encore of course, whipping the audience into a bouncing frenzy.

In short, sheer joy! I’m now off to compose my letter to Father Christmas, asking for a really big television...