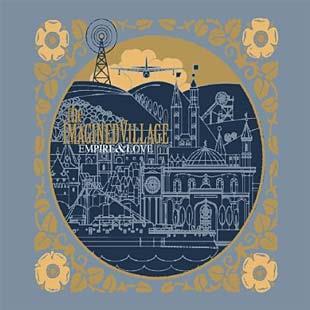 Empire & Love is an album of earworms, a smorgasboard of old favourites and rediscovered gems. Now fully formed into a regular line up, or ’parish council’ as the band prefer, The Imagined Village have come back with an album that builds on the successes of their debut, and their exciting live performances.

This album, and the ethos of the band, now relies less on guest artists (although Jackie Oates makes a wonderful appearance) and also forgoes programmed beats, in favour of trying to capture their live energy and emphasise the songs and tunes.

Each time I have listened to Empire & Love I have come away with something different, and I think this will continue for a long time. The variety of tracks finds something to suit many moods, and also allows for both the casual listener, wanting background brilliance, and the dedicated devotee of folk and the Village. Even within single tracks, like ’Sweet Jane’, we can see both a meditative and almost trance-like musical style, alongside Chris Wood’s earthy lyrics, sitting very much in the folk tradition.

But such comparisons are not new, or surprising. That is what The Imagined Village do so well, and this album continues to bolster their reputation, and show that such collaboration is no gimmick.

Martin Carthy updates the Napoleonic ’My Son John’, relocating some of the action to Iraq and Afghanistan in a way that seems to signify an unbroken line of soldiers stretching back and forward in time. Eliza Carthy meanwhile, takes a lesser known Ewan Maccoll song, and makes it so much her own, I was surprised she hadn’t written it herself.

But the surprise track of the album for me is one that I have long fallen out of love with - ’Scarborough Fair’. Years of (over) exposure to Simon and Garfunkel left the track far from my heart, but the Imagined Village have rehabilitated the track with a well-considered vocal from Chris Wood, and beautiful instrumentation. It has come full circle across the Atlantic and back again to rest with Martin Carthy, and I am so glad. I look forward to singing it with the rest of the crowd and discovering something new in such a familiar song.

Released by Emmerson, Corncrake and Constantine on 11 January 2010.