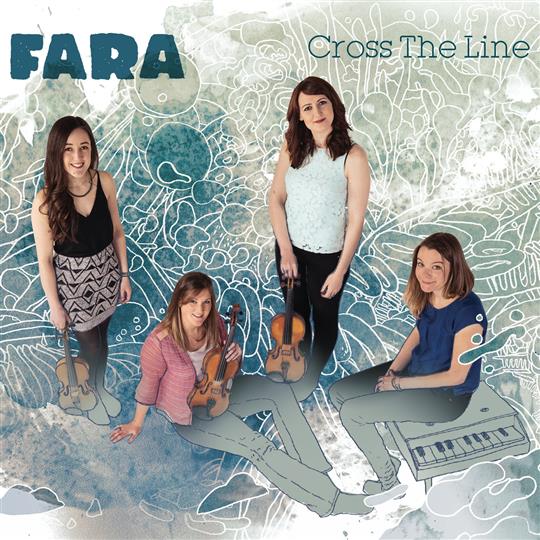 Cross The Line may be Fara’s debut album, but they’ve certainly had long enough to get to know each other. With three of the quartet having met at school in Orkney, and the fourth also coming up through the Orcadian folk scene, the band has been years in the making.

Unsurprisingly for a band of three fiddles and a piano, the backbone of their repertoire is tune sets performed in that traditionally Scottish robust and disciplined manner. Album opener The Dragon sees them tear through three reels in breathless fashion, with even the ornaments played in tight unison.

Bright Grey begins with a similar approach taken to a meaty strathspey, the snaps of the short notes crisp but not mechanical. But after a few times round, the hefty piano chords drop out for a minimalist three note figure on solo fiddle, before kicking off a quirky and off-beat tune.

With the accompaniment on the tune sets consisting mainly of choppy block chords, it’s the songs on Cross The Line where pianist Jennifer Austin gets to show her range. On Three Fishers, the broken chords conjure up both the image of the rolling waves and the anxious wives in the tale of peril at sea.

That song makes good use of plucked fiddle, as does Shapinsay, where the one fiddler left playing with a bow uses it to tease the notes of the slow polka out in both a playful and refined fashion. Likewise, the plucking on Games People Play provides a much more arresting beginning to the song than if the same notes were played on acoustic guitar.

All four members sing, leading to harmonies on I’ve Endured made close not just by the shared local accent, but also the influences from their shared education and history together. However, the other American song on the album, Whisky You’re The Devil, is done a bit too pleasantly for the listener to believe that the band have just been on the lash, unlike the best drinking songs.

The simple instrumentation and straight down the line arrangements on much of Cross The Line may not be to the taste of all. But throughout the album there’s still an all pervading sense of fun: clearly the result of four friends enjoying making music together.