Ross and Ryan Couper - And Den Dey Made Tae 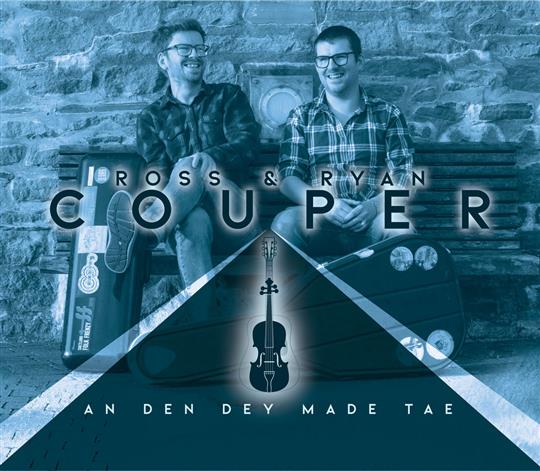 It may be a cliché that close family members make for great musical combos, but like many cliches it has at least a grain of truth. To prove the point, Peatbog Fairies fiddler Ross Couper has teamed up with his brother, guitarist Ryan to record an album of the tunes they enjoyed playing together growing up in the Shetland Isles.

From the unbelievable runs of notes on opener Shetland Reels onwards, Ross’ fiddle pyrotechnics steal the limelight. In a perfect blend of tone, technique and temperament, the sets of traditional and more recently composed tunes take in everything from sumptuous low notes on The Lucky Child to absolutely wild high slides on The Coast.

Ryan does more than just keep up with the sometimes frenetic pace of his brother’s playing. The Dance features multiple subtle rhythmic shifts, moving up the gears from groovy medium-pacer to skipping light swing to breakneck reel in full flight.

If these smooth mid-tune changes of accent and tempo rely on a musical bond verging on telepathy, then Tom and Jerry sees the duo chasing each other round in circles at top speed. The rapid and jazzy chord changes and jaw dropping fiddle solo make the session bar at Shetland Folk Festival sound like Hot Club de Lerwick.

The brothers catch their breath between high octane reels on tracks such as the tender Jessi, pensive Billy Joel cover And So It Goes and nicely swung jig set Falling With Style. They pick up the pace one last time with sister Mariann joining them on piano for some earthy Shetland fiddling on Da Foula Reel.

The unpretentious but astonishingly executed material on And Den Dey Made Tae from the two brothers shows that the musical traditions of Scotland’s most northerly region are alive and well.

Released on CD and digitally on Couper Records on December 11 2020.