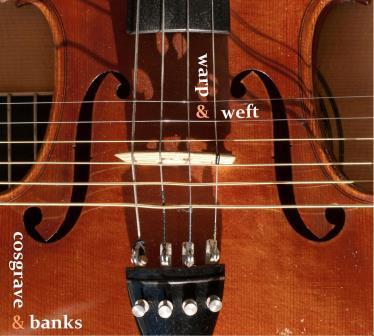 Warp & Weft is acoustic duo Cosgrave & Banks’ first album, and an excellent musical journey it is too. Exploring the diversity of traditional and contemporary music from Russia to Canada, Norway to England and Sweden to Scotland, each track is skillfully arranged and performed. This album challenges, surprises and delights.

Both artists have significant musical pedigree, from classical and world music to traditional folk. Amongst other performing accomplishments Cosgrave has played with Irish/World Music band Sin É and Banks with the Carnival Band, prior to forming the duo.

The album contains a number of highlights. The Maple’s Lament recounts the fiddle’s memories of when it was part of the maple tree. Evocative lyrics are complemented by sympathetic accordion and fiddle creating an emotional connection with this engaging song, written by Laurie Lewis, US bluegrass fiddle player.

Herr Roloff’s Farewell is a set of three traditional Scottish tunes. From the lamenting violin of the title tune and the bagpipe-like fiddle and accordion of The Duke of Roxburgh’s Farewell, to the mischievous and skittish interpretation of The Mathematician, this track illustrates the artists’ dexterity in tightly weaving this Scottish trio together.

Tjønneblomen is a haunting and atmospheric slow waltz from Norway on which Banks expertly plays the Hardanger fiddle, Norway’s national instrument. Demonstrating the diversity of the artists’ influences and style, Oliver Schroer is a Canadian set named in honour of the accomplished Canadian fiddler. Pacey and vibrant guitar and fiddle playing with tempo, style and passion.

English traditional music lovers may recognise Nightingale, however it is further finessed by being bookended with a traditional Breton waltz. This creates a unique pairing that is both engaging and enjoyable.

The Ducks on Ice set, written by Cosgrave, is an exciting unbridled musical ride. It demonstrates exceptionally tight playing with an improvised texture. This theme continues in the Swedish fiddle tune Hårgalåten, which has a slight jazz impro vibe, whilst also unmistakably traditional in origin.

Cosgrave & Banks have created an engaging and enjoyable listening experience which leaves a sense of personal connection with the artists, and insight into the cultures and traditions influencing them. The weaving metaphor in the album’s title is extremely apt. Music, story-telling and imagery are skilfully combined and underpinned by excellent musicianship.

The successful warping and wefting of a diversity of music from both near and far is testament to Cosgrave & Banks’ skill as master weavers of tune and song.