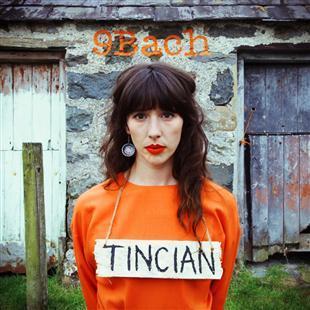 The Welsh word, Tincian is difficult to translate. It can mean, amongst other things, to move with a tinkling sound, to ring or to resonate. It’s an appropriate name for 9Bach’s second album which not only deals in stories that resonate down the ages but tells them using sounds that echo the onomatopoeic nature of the album’s title.

As with their debut album, all the lyrics, bar one, are written in Welsh by the lead singer Lisa Jen. Some of the songs are autobiographical, some are imaginary but all tell stories.

The first track, Lliwia, sets out 9Bach’s stall. Above a pulsing bass beat, tinkling keyboards and shimmering guitars Lisa Jen’s pure voice sings about the joys of childbirth. Lliwia means Colours and the song compares the pain and pleasure of giving birth to the rush of taking Ecstasy.

Llwynog tells of a fox that has just escaped from a farmer and his dog after killing a lamb. Again, there is an insistent bass line, overlaid by piano and tinkling percussion. This piece, like many of the other songs, has echoes of drum and bass music with instruments appearing and disappearing into the texture.

One of the standout tracks is Plentyn (Child). This song comes out of 9Bach’s time in Australia where they worked with the Black Arm Band Company, a music and theatre company focusing on Australian Aboriginal experience and identity. The song tells the story of a small child snatched away from her mother’s breast by fierce men laughing. Even without a direct translation of the lyrics the anger of the song of clearly felt by the listener.

Although 9Bach are a six piece band some tracks are augmented by guest performers. Ffarwél, for example uses the considerable talents of the Penrhyn Male Voice Choir in a setting of a poem collected by local historian Ieuan Wyn. Over piano, guitar and fuzzy bass the song describes the feelings of nostalgia and regret of a quarry man leaving his place of work for the last time. As the song builds, the wordless choir sing in the background eventually taking over the song before a last plaintive solo verse sung by Jen. It’s the most powerful piece on the album.

Unlike their previous album, Tincian only includes one traditional Welsh song. Pa Le? (Which Place?) evokes the feelings of a woman waiting for her lover to return home. The piece is notable for a Welsh harp solo (expertly played by Esyllt Glyn Jones) which eschews tradition for a more atmospheric and direct approach.

9Bach have made great strides since their 2009 debut album. It’s a measure of Tincian’s success that the listener does not need to know any Welsh to be fully immersed in the soundworld the songs create. However, it’s a pity that texts are not provided as this is the only blot on what will surely be regarded as one of the most important folk/world music releases of 2014.