Amy Henderson - Soul for a Compass 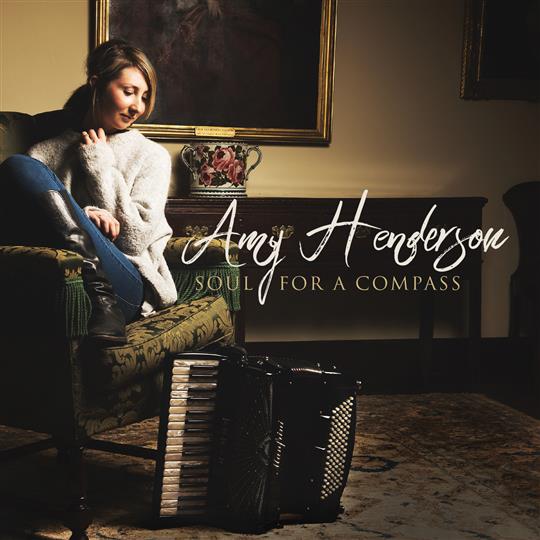 Amy Henderson grew up surrounded by the traditional music of her native Scotland. Further study on the Newcastle University folk degree has led to her becoming a widely respected accordion teacher and performer.

Soul for a Compass is her debut album, and the music that she grew up with is very much in evidence in the material she has chosen. Taking the lead on accordion and vocals, she has added a small selection of guest musicians who add guitars, percussion, double bass and keyboards to the mix.

Rather unexpectedly perhaps, the album begins with a cover of Mary Chapin Carpenter’s Why Walk When You Can Fly? coupled with the tune Highlander’s Revenge. Henderson has a clear pure voice which fits perfectly with the upbeat message of this song and her accordion playing is quite joyous.

In sharp contrast to this is her arrangement of the traditional song Easy & Free, a gentle drinking song in waltz time in which the accordion and piano duet.

This is followed by another traditional song, Bonny Ship the Diamond. Again, this portrays another complete change of style, with a very energetic arrangement, guest musicians providing backing vocals and percussion. One fun number is Make Up Your Mind, which has a bluegrass feel.

Several of Henderson’s own compositions appear on the album, including the gently lyrical tune Kirsty & Kevin. Also named after two people is Linda & Kenny’s Waltz, which features accordion, piano, double bass and subtle percussion. The album ends in contemplative mood with Golden Years, in which the accordion is accompanied by some gentle guitar.

The mixture of traditional, original and self-penned material shows Amy Henderson to be a skilled composer and arranger as well as showcasing her prowess on the accordion. She is equally at home with gentle and lyrical as she is with fast and furious.