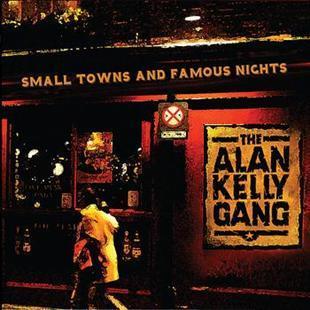 Having toured as a band for many years, the Alan Kelly Gang have clearly made the most of the time to hone their skills. Their debut album, Small Towns and Famous Nights, is assured and rich with musicianship.

The driving Galway Reels offers an upbeat start, tapping along nicely with some nifty guest percussion from Jim Higgins. It’s followed by Hopalong, which showcases Kelly’s lyrical, rhythmic playing well. He manages the trick that all accordionists surely aim for - to make it sound like he’s playing two instruments at once. As the title promises, it quickly hops into a jaunty second movement.

The introduction to The Garden evokes 1920s Paris, before the arrival of the first voice on the album. It belongs to Steph Geremia, proving as nuanced and talented a singer as she is a flautist. It’s a perfectly paced story of unrequited love set to an irresistible waltz, and one of the album’s highlights.

The other notable singer on the album is the estimable Eddi Reader, who pops up on Connemara, John Douglas’s tale of discovering his antecedents were as musically inclined as he is. Aided by Boo Hewerdine’s guitar, it’s evocative and sweet, if a little repetitive.

Guitarist Tony Byrne and fiddler Tola Custy make thoughtful contributions throughout, driving along the group’s mixture of traditional and modern tunes and songs. The band balance styles and tempos well - most fun on tracks where the pace is picked up, like the playful Birdmaker and the intense crescendo of Golden Pipe.

The album ends with two more sober pieces: the life-affirming, post-parting glass of Journeys End, and Lollie’s Waltz, a charming tribute to Kelly’s grandmother who at 94 reportedly “loves nothing more than a good night out and to hear great music”. She won’t go far wrong with this.